Aric of Dacia is back in the all new X-O Manowar from Valiant Comics, and war is coming with him.

Can’t keep a good Visigoth down

Trapped on an alien world, and conscripted into a war that he has no place in, Aric is having a tough time. Oh, and he’s also missing a hand now, and separated from his armor, the sentient war-machine that makes him the deadliest warrior in the known universe. So yeah, tough time.

But things are looking up… sort of.

A stunning new beginning for Valiant’s most enduring icon starts here on March 22nd with part one of “SOLDIER” – a punishing, three-issue introduction that will push Aric of Dacia beyond the farthest limits of our galaxy…and into the brutal opening salvo of the ultimate X-O Manowar tale ever told!

“What do you do that hasn’t been done before? I figured the way to do that would be to just throw him on a completely alien planet with all new cultures,” series writer Matt Kindt told Mashable. “”I think what’s fun is [that] the series has Aric’s story arc that he’s going to follow, but then the armor also has its own… The armor is evolving, and it’s growing, and it’s going to have its own arc, too.” 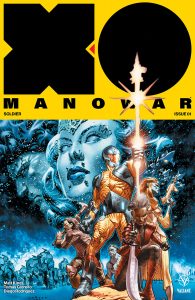 Born under the oppressive thumb of the Roman Empire, Aric of Dacia learned warfare at an early age. It was amid such violence that he was abducted by an alien race. Forced into slavery, he survived where others perished. His escape would come from bonding with a weapon of immeasurable power: the X-O Manowar armor. With it, he returned to Earth…only to find himself stranded in the modern day.

But that was a lifetime ago.

Now, far from home on a strange and primitive new world, Aric has begun a new life. Liberated from his past, he tends to his crops. Free from war. Free from violence. Free from the armor.

But the machinery of death marches his way once again. Conscripted into an alien army and thrown into an unforgiving conflict, the fury inside him finds voice as he is forced to embrace the armor once more. With it, he will decimate armies, topple empires and incite interplanetary warfare as he rises from SOLDIER to GENERAL to EMPEROR to VISIGOTH. They wanted a weapon. He will give them war!

Aric coming out of ‘retirement’ and back into the Valiant Universe as X-O Manowar is big. Plainly, it’s like Superman or Spider-Man being out of it for a while (in any form) and then returning. Aric is pretty easily the biggest hero in the Valiant U after all, so you can see what this fresh run means.

And with that in mind, you can better understand the scope of what Valiant is doing here. X-O’s return won’t just be a one off arc. Nope, this is going to be a whole year of content. Soldier is the start, but then the book will roll into General, Emperor, and -finally- Visigoth.

Does all that mean what the titles imply? Well this is Aric we’re talking about, so probably. Though I assume that the “Visigoth” means that he’ll be back on Earth once again at the conclusion of all this. Though honestly, who knows.

Valiant is not one to shy away from massive shake ups for its characters, and that includes the Manowar. It could be, that he’ll become a ‘cosmic’ hero for the publisher, something that they haven’t really gotten into. I do find it hard to believe though, that he wouldn’t want to check in on his fellow time-displaced Visigoths on Earth, once he gets his armor back. So we’ll see.

Bottom line though, this one’s an epic

In the wake of “SOLDIER”’s staggering assault in issues #1-3, X-O MANOWAR then continues in 2017 and beyond as a superstar cast of Valiant’s most acclaimed artistic talents chart Aric’s path from SOLDIER to GENERAL to EMPEROR to VISIGOTH for a vicious, year-long journey of bone and bloodshed born from the battlefields of a herculean alien empire:

So it looks like there’s quite the roller coaster ride on the way for Aric, one that’ll last all of 2017. And it starts with X-O Manowar #1, landing on shelves this coming March.

Jason's been knee deep in videogames since he was but a lad. Cutting his teeth on the pixely glory that was the Atari 2600, he's been hack'n'slashing and shoot'em'uping ever since. Mainly an FPS and action guy, Jason enjoys the occasional well crafted title from every genre.
@jason_tas
Previous The HITMAN Season One Appears…
Next Differences between the two versions of new Zelda are almost nonexistent