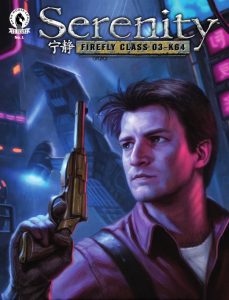 No power in the verse could stop them! Eleven years after the release of the Serenity film, the crew of Serenity appears in the pages of the new Serenity comic.

A couple years have passed, and Malcolm Reynolds and his crew of outlaws continue experiencing tough times. When tensions rise a call for help raises interest: track down a missing friend and the investigate the mystery surrounding her disappearance.

We get to join some of our favorite crewmates in all their mischief. Mal, Jayne, Kaylee and Inara among them. As usual, Mal is lining up whatever jobs can pay. Some jobs more interesting than others. Wash has a memorial on a moon somewhere, and River is now your pilot.

Tensions are high between Mal and Jayne. Mal states they had another successful excursion, while Jayne is tired of wasting time and effort for such piddly jobs. Mal is always happy when things go smooth, while Jayne is only happy when he gets to use his guns or grenades. Their network had been chiseled away by the Alliance, so they can only take on some of the smaller tasks, and they are anything but glamorous.

“…I’m not of a mind to murder innocent folk today, just hurry up…”

Then Mal gets a call about a friend who had disappeared. All of a sudden, the entire crew’s anticipation perks up. Jayne polishes his guns, Zoe and the rest are making sure they have everything they may need. Walking into strange places can always be a bit unsettling. No one knows what they are walking into.

Issue 1 of 6, It looks like Mal and company are about to have an adventure indeed. As to be expected with the happenings in the verse, they walk into a room looking for one thing, and find themselves presented with something completely different. The artistic team of Jeanty, Story and Dzioba really bring you back in. Roberson makes you feel like you are among the crew when all these calamities happen, and there’s no better place to be.

The Corners Of The Verse

Mal, Jayne and company continue to scrape by in the 'verse. Though when they walk into a room full of something other than what they expect, we're left wondering what's next.

A fan of media on multiple platforms, I am always watching or playing something! Who knows what I will be on to next?
@mackeyp42
Previous ThQ Nordic snaps up NovaLogic franchises
Next Inhumans vs X-Men #1 (Comics) Preview