Two classic superhero TV shows are about to meet on the printed page. DC has made Batman ’66 Meets Wonder Woman ’77 official.

If you’re a fan of Adam West and Burt Ward’s Batman television show from the ’60s, then you’re probably loving what DC is doing with it. The show has spawned a comic series that’s explored a whole mess of new characters and situations that the show never did. Chief among all that, are some every interesting crossovers.

The caped crusader has crossed paths with The Green Hornet, The Man From U.N.C.L.E., and even Emma Peele. Still though, the latest one announced is something special. That’s because Linda Carter’s version of the amazing amazon herself will meet up with the not-so Dark Knight in Batman ’66 Meets Wonder Woman ’77. 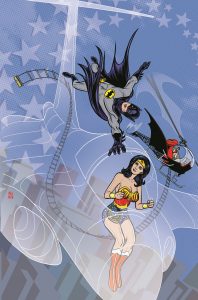 Writer’s who know their heroes

The mini-series will be co-written by both Batman ’66’s Jeff Parker and Wonder Woman ’77’s Marc Andreyko. So obviously, both men know the versions of these iconic characters that they’ll be working with. And both are pretty excited about the possibilities.

“Readers have asked for this team-up since the BATMAN ’66 comic began and I’m thrilled we’re able to finally make it happen,” said Parker. “Most of the credit goes to Marc Andreyko. He found me at a show and within minutes had me fired up about the story possibilities. It really feels like Lynda Carter and Adam West going into action again, this time together.”

“It was BATMAN ’66 by Jeff Parker that inspired me to ask about doing WONDER WOMAN ’77, so getting to co-write with him is a dream come true,” said Andreyko. “The story we’re spinning spans thirty years as these two legendary Super Heroes fight an ancient evil across the decades. We’ve planned lots of twists, cameos and surprises along the way that fans of both series will appreciate.”

Excited? The 12 part series will launch digitally first. You can expect it to kick off on November 23rd, with it hitting physical format in January. In all, the physical series will run a total of six issues, with two digital stories being fit together for one actual comic book.

Here are the particulars

BATMAN ’66 MEETS WONDER WOMAN ’77 #1
What mysteries are hidden in the book Ra’s al Ghul just hired Catwoman to steal? And why does this caper lead Batman down memory lane—to his childhood fight against actual Nazis?! Witness his first encounter with one of the greatest heroes the world has ever known: Wonder Woman!

Jason's been knee deep in videogames since he was but a lad. Cutting his teeth on the pixely glory that was the Atari 2600, he's been hack'n'slashing and shoot'em'uping ever since. Mainly an FPS and action guy, Jason enjoys the occasional well crafted title from every genre.
@jason_tas
Previous Mass Effect Andromeda release date leaked?
Next Origin Access grows yet again with MIrror’s Edge and more