Home / industry / Yooka-Laylee To Get A Physical Release

Yooka-Laylee To Get A Physical Release 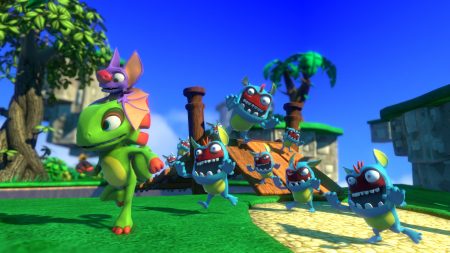 Yooka-Laylee, the successor to the hit series Banjo-Kazooie, will be both digital and physical releases.

Yooka is brought to you by Playtonic Games, and funded with the help of a KickStarter campaign. Slated to arrive in the first quarter of 2017.

“We’re delighted to be able to offer Yooka-Laylee in both digital and boxed flavours in time for the game’s launch in Q1 2017. As we speak, our business badgers are busily burrowing away on an initiative that will allow Kickstarter backers to upgrade their digital pledge to a physical version, if they choose to do so. We’re not ready to share the exact details just yet, but very soon you should be able to stick your head in the badger hole and look for yourself.” – Playtonic blog

Playtonic Games showed off their developments at EGX, where Yooka was one of the most popular games at the show.

A fan of media on multiple platforms, I am always watching or playing something! Who knows what I will be on to next?
@mackeyp42
Previous Resident Evil and Batman to be timed exclusives for PSVR
Next NYCC 2016: Dreamworks and Netflix bring fresh animation