You might already own a copy of Star Wars: The Force Awakens. If you’re a big fan, then I’m sure you do. Here’s the question though: would you like to see it in 3D, right in the comfort of your own home?  And if that prospect doesn’t interest you, maybe a pretty awesome looking steelbook might.

The collectors… have awakened

Contained within this one handy edition is the original, theatrical cut of The Force Awakens in no less than four formats. You get the blu ray, the DVD, a digital HD copy, and -here’s the hook- The Force Awakens 3D. Yep, a 3D copy to show off on that fancy 3DTV of yours.

True, 3D might not be considered what it was a few scant years ago, but it was kind of made for stuff like this. That’s hard to argue. After all, if you’re going to watch a movie that pops out of your TV, you want it to be something like Star Wars.

And as I mentioned, there’s more to this than just 3D too. 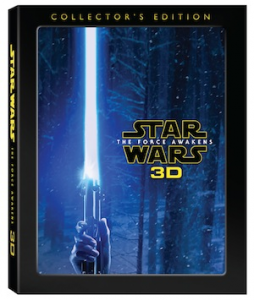 A steelbook case encapsulates the discs, which themselves are more than what was included in the standard release. This time around, you’ll find bonus goodies like “deleted scenes, behind-the-scenes conversations with cast and crew and revealing, never-before released audio commentary by director J.J. Abrams”. You know, just the kind of stuff Star Wars junkies can’t resist.

November 15th is the date, and that’s just a little over a month from another big date for Star Wars fans. Rogue One: A Star Wars Story blasts in to theaters on December the 16th.

International launch dates are as follows:

Jason's been knee deep in videogames since he was but a lad. Cutting his teeth on the pixely glory that was the Atari 2600, he's been hack'n'slashing and shoot'em'uping ever since. Mainly an FPS and action guy, Jason enjoys the occasional well crafted title from every genre.
@jason_tas
Previous Sony confirms NYC meeting. PS Neo inbound?
Next Blood, gore and the world of Inquisitor – Martyr