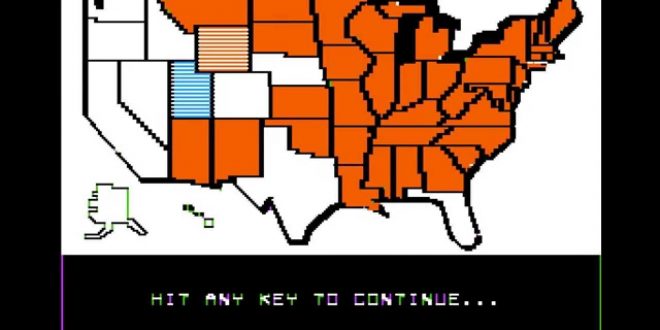 Given the current political situations developing in the UK, the ever intensifying US presidential election campaigns, and politics across the world, now seems like an ideal time to delve into the history of political video games. While naturally, it would be difficult to include every political game here, this article will aim to provide information on the most successful and innovative political simulation and strategy games in video gaming history.

The Beginning: The 1980s and political simulation

We begin in 1981 with President Elect on the Apple II, the first commercially successful video game of a political nature to be released. Players could simulate historical American presidential elections from 1960 to 1984, and later up to 1988 when the game was re-released in that year. There was also the option to play ahistorical scenarios and also with fictional candidates. Players choose whether to send candidates or VP candidates on trips to states or foreign countries during the week. They can also allocate funds to spend on campaigning in any of the seven regions. Alternatively, it is possible to let the computer simulate entire campaigns. President Elect was praised for its realism by critics.

For Europeans, one of the first political games was Dictator, released in 1983 for the ZX Spectrum by DK’Tronics. The game places the player in the role of a dictator of a fictional country. They must make choices presented to them in a number of scenarios.  Another widely successful game is Chris Crawford’s Balance of Power, released in 1985 for the Apple Macintosh and later on a host of other platforms. Players take on the role of either the US President or General Secretary of the USSR during the Cold War. They take turns responding to global events, with the ultimate goal of avoiding nuclear war and raising national “prestige” as high as possible. It was touted by Computer Gaming World as one of “the most innovative computer games of all time.”

President Elect set the precedent for video games that focussed on the simulation of political elections. It’s spiritual successor, Power Politics, came along in 1992. Players can campaign for one of thirty presidential candidates from the past, and also create a candidate, defining how liberal or conservative they are and where they stand on a number of issues. The Associated Press actually used the game to simulate the 1992 presidential election, which correctly predicted a win for Bill Clinton. It also made it’s way into over 400 colleges and universities to be used as an educational tool. Another game, The Political Machine, was released in 2004 by Ubisoft and Stardock. It lets players traverse a 41-week campaign on behalf of a number of presidential candidates. They can establish campaign HQs within states and spend money raised on advertisements. The game has had sequels released for the 2008, 2012 and 2016 elections. The President Forever series follows the same formula, with developer TheorySpark’s website promising the latest iteration to be “the most in-depth, intense political election game ever made.”

While Dictator was probably the first game to focus on the governing of a country, since then there have been only a few video games to focus on this. One of these is Crisis in the Kremlin, released in 1991 for MS-DOS. The game puts players in the shoes of Mikhail Gorbachev, Boris Yeltsin, or Yegor Ligachev, with each leader representing a faction. Beginning in 1985, players have control over budgets and policy, and must also respond to real-life events like the 1988 Chernobyl disaster. Chuck Moss wrote in Computer Gaming World in 1992 that the game was biased in a way that “drives the player toward establishing a free market, and both political and social liberation”. He also criticised it for giving the player too much control over the economy, with no way to reduce it. A more modern approach to government sims is the Democracy series. In the latest iteration, Democracy 3, Players take control of one of six countries and must steer it towards prosperity. The never-ending chains of cause and demonstrate how tough running a country is. The game is incredibly satisfying, as you try to increase GDP, curb unemployment and create the perfect society.

Games that dabble in politics

many other video games have included some sort of political-related mechanisms. City-building games like SimCity put the player in the role of a mayor, as they build a city from the ground up. Tropico is a series that lets players build and rule their own banana republic, and allows them to implement various policies as well as constructing buildings. Strategy games also often feature politics. The Total War franchise has always had some degree of political intrigue about it, with the pinnacle probably being Empire: Total War.

So there you have it, a small but significant insight into the history and world of political video games. While it may not be the most appealing of fun to some people, some of these games could and have served a strong educational purpose.

From the tender age of four, when he was given his first Sony PlayStation, Dan has been hooked on video games. He loves his RPGs more than anything, enjoys immersion and will definitely blame any FIFA losses on scripting.
@@Dan_Atlee
Previous SDCC 2016: Fox celebrates Aliens, Apocalypse, and tons more
Next NARUTO ONLINE Brings Konoha To Your Living Room