Some games market themselves as a challenge. They taunt the gamer, daring them to step into their world and attempt to survive. The greats, like Dark Soul, pride themselves on providing a grueling but fair trial by fire. Others, like Battletoads, become notorious due to a lack of the latter.

So, where does Furi, the latest addition to the hair pulling genre, land itself?

The Game Bakers’s Furi, the developers first release on the PS4 and PC, is a hack and slash/shoot em up hybrid currently free with PS Plus. Taking place in a strange alternate reality, gamers take on the role of an unnamed protagonist held captive in a large space bound prison. After receiving ALL of the torture, a mysterious bunny hat wearing man expositions his way into our cell and tears the shackles off.

We are told that the only way to escape is to kill the jailer. And all of the guardians leading up to the jailer. Sword in hand, our stoic warrior steps out of his personal 5×5, prepared to strike down those that have tormented him for so long.

From that point on, a gauntlet of 10 challenging boss fights commences, with each one being harder than the last. In between these ferocious onslaughts, respite comes in the form of leisurely strolls through a variety of vibrant dimensions that house each guardian.

Furi has a surprisingly robust story and a gorgeous visual design. Bunnyman serves as a narrator, reciting cryptic prose on the history of the prison and the guardians during the intermissions between fights. Handled poorly, this type of storytelling could end up feeling lazy and even intrusive. Thankfully, the voice acting is top notch and the writing remains consistently engaging throughout the entire game. Bunnyman’s love of pronouns does make the dialogue confusing at times, though. 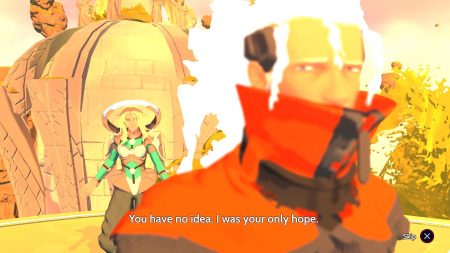 The guardians, which also remain nameless, are portrayed with enough nuisance to leave a momentary impression. Their art design mirrors the dimensions they patrol, while also filling in the holes left in their back-story by Donnie 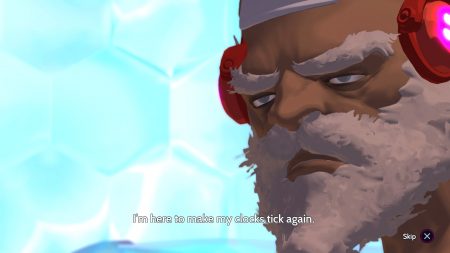 Whether I was fighting the Master of Time or a psychotic cybernetic she-nightmare, every conflict felt crucial and, more importantly, propelled the narrative forward. Each guardian adapts as the battle goes on, some having more than 6 different stages, creating the illusion of control and personality.

Sadly, the nameless AND silent protagonist has precisely none of that. From the very first second to the bombastic climax, Furi’s hero offers nothing in the way of growth. A post credit sequence explains why this character is written this way(a pretty decent twist too!) but it does make him hard to connect to.

Gameplay wise, Furi is best enjoyed in small bursts. Each battle goes through a variety of stages (represented by a stage-specific health bar), with the player having a few of his own. Every time a stage is beaten, the health bar regenerates and an extra life is earned back.

At the gamer’s disposal, a string of useful moves provide the skills required to navigate the trials faced throughout the relatively short runtime of about 6 hours (depending on difficulty level). Most stages are further divided into two main phases: Shooting Gallery and Melee Arena. The majority of the game time will be spent dashing through large areas as the guardians fire lasers towards your general direction.

Moving at a hundred miles an hour, these segments will require split-second reflexes and a strong heart. Occasionally, the player can return the favor and fire back with their own laser pistol (or unleash a much stronger charged attack). Despite the frantic nature of these long distance battles, patience is actually the name of the game. A risk/reward system comes into play, either go for broke with a heavy hitting charged blast that will leave you vulnerable and open to an attack, or slowly chip away at the bosses health with the pistol. 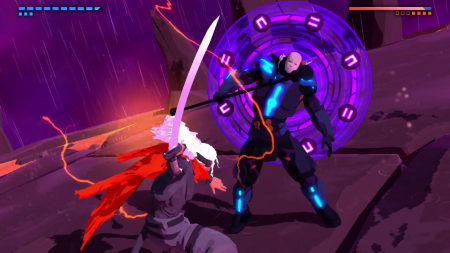 The Melee Arena takes a different approach. If one were to describe the Shooting Gallery as an oscillating symphony consisting of dozens of instruments, Melee is a heavy metal 20-second drum solo.

Taking place within a small circle, a fierce back and forth between the two warriors take place. Using dash and the ability to block (which requires very precise timing), the gamer can force an opportunity to hack and slash the target for some big damage. A charged sword attack can also be done (or stored using the shooting button) but there rarely is enough time to set it up.

Although these dog fights are short lived, they provide the most satisfying and adrenaline pumping moments in Furi. Were the Shooting Gallery attempts to overwhelm you to the point of submission, often resulting in frustration and I’m getting too old for this sh!t moments, not once did I feel cheated or tired after getting beaten down to mash within the circle. The gameplay mechanics are perfectly responsive as well, with no frame-rate issues during combat.

Taking it back full circle to the original question, Furi often succeeds in being one of the great challenges of modern gaming. It might depend a bit more on reflexes than skill, but there is no doubt that the majority of the battles feel even. Unfortunately, a few rare stages take’s it a step too far as hundreds of balls of doom bounce back and forth and almost seem to gravitate towards you. And once even a millimeter of fatigue sets in, Furi becomes almost impossible to beat.

Another slight negative is a lack of progression. Despite every Guardian learning new tricks and skill as the battle progresses, our silent protagonist does not add to his move set. No new combos or weapons, hurting the replay value. The Game Bakers’s do provide a few unlockables to combat that limitation, including a practice mode and an entirely new difficulty level. Practice is a genuine godsend since it allows any of the beaten Guardians to be re-defeated, rewarding a skill rating from A-D depending on performance. In turn, each rating unlocks an art piece for that particular boss.

Furi comes, initially, with two difficulty settings (easy and normal). I’d suggest starting on normal since easy provides no trophies and turns each fight into a cakewalk (pressing X also makes the walking sections automatic). The level can be reduced from normal to easy after a game over BUT note that there is no going back after that. Still, it does mean that even those that just can not keep up with the furious nature of the gameplay can still enjoy the picturesque art style and entertaining story of Furi.

Hack and Slashing Through the Filler

For PS Plus owners, Furi is a no-brainer. The Game Bakers's make good use of their budget, successfully combining gameplay, story and visual splendor to create a fulfilling whole.

Ever since Mark first learned how to walk and talk, games have been a part of his life. Just about missing the SNES era, Mark spent most of his weekends with a Playstation controller in his hands, saving the Isles of Wumpa and watching his brother attempt the now infamous Lara Croft hidden trick. A lover of sarcastic characters with big swords, Mark favours Hack n' Slash and JRPGs, although every genre is worth trying more than once. Favorite genres:Action, RPGs, JRPGs, Hack n' Slash
Previous Pokemon Go Coming to a Phone Near You
Next Need for Speed, Unravel and more join EA Access