Ms. Marvel is forced to choose a side in the rapidly accelerating Civil War II, as her crossover hits here in issue #8. 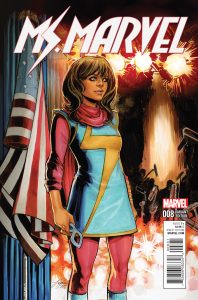 This June, as the blockbuster Civil War II heats up, Kamala Khan gets called to the front lines to join the fray! Today, Marvel is pleased to present your first look inside MS. MARVEL #8 – a Civil War II tie-in from creators G. Willow Wilson, Takeshi Miyazawa and Adrian Alphona! A new Inhuman has emerged, one with the power to predict the future. The heroes of the Marvel Universe are faced with a choice. Wield this new power to change the future as they see fit, or reject it – and allow tomorrow to unfold unaltered. As the battle lines are drawn, which side will Kamala choose? Is she ready to take a stand against her idol and mentor, Captain Marvel? Find out this June as Civil War II comes to Jersey City in MS. MARVEL #8!

One of the hottest book in the Marvel stable as of late, Ms. Marvel joins pretty much every other Marvel Comic and gets a crossover into Civil War. This should kind of be an important one too, what with the title character being so closely linked to Captain Marvel.

Ms. Marvel #8 lands on the stands and arrives for digital download on June 22nd.

Jason's been knee deep in videogames since he was but a lad. Cutting his teeth on the pixely glory that was the Atari 2600, he's been hack'n'slashing and shoot'em'uping ever since. Mainly an FPS and action guy, Jason enjoys the occasional well crafted title from every genre.
@jason_tas
Previous Hasbro reveals new Wolverine and BAF Juggernaut
Next No Man’s Sky delayed, death threats hit press and developer