Want to go to the UFC Fan Expo in Vegas? Keep reading. 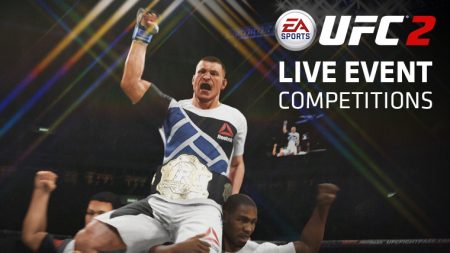 That could be you hoisted above the crowd… championship belt slung over your shoulder… well, okay not really. But you could win a trip to the UFC Fan Expo in Las Vegas, to compete in UFC 2’s live finals event.

“Fans love EA SPORTS UFC 2 for the intense head-to-head competition, and we’re excited to raise the stakes for all our players,” said Todd Sitrin, Senior Vice President and General Manager of EA’s Competitive Gaming Division. “Live Event Competition encourages players to experience the thrill of each bout by bringing fans even closer to the intensity of mixed martial arts.”

“We are thrilled to launch our first online competition to find the top EA SPORTS UFC 2 players,” UFC Senior Vice President of Global Consumer Products Tracey Bleczinski said. “UFC International Fight Week is the largest celebration of combat sports in the world and we couldn’t think of a better place than the UFC Fan Expo to crown the first-ever EA SPORTS UFC 2 champion!”

Pretty neat. The grand finals match will take place the same weekend as the 5th Annual UFC International Fight Week, and  UFC 200, which will see UFC fighters Cormier and Jones meet for the second time. The match itself (the video game version) will take place on Friday the 8th of July at Fan Expo itself. And the winner? Well you’ll receive a kingly sum, $10,000 USD and a championship belt!

To enter all this madness, you’ll only need to do a few things in the UFC 2 video game on your platform of choice. Here’s the rundown:

Players enter the competition in Live Events on the EA SPORTS UFC 2 menu, select one of four athletes fighting on an upcoming card, customize their athlete by applying five out of 10 fighter perks, and start competing online. All available in-game fighters are balanced with the same overall attribute rating and move level. Rankings on the global leaderboard are determined by the number of wins a player can accumulate during the qualifying period before taking three losses. Players are encouraged to go back and fight again as many times as they’d like to improve their top score during the qualifying period.

At the end of each qualifying period, eligible players with the top scores on Xbox One and PlayStation®4 will be invited to compete in the finals in Las Vegas where the champion will be crowned at the UFC Fan Expo leading up to UFC® 200: CORMIER vs. JONES 2, which takes place on Saturday, July 9, at T-Mobile Arena. The semi-finalists will receive tickets to the landmark event and other special prizes. The finalists aren’t the only ones who win though, as all players who compete in the Live Event Competition will have a chance to earn in-game rewards based on their overall performance.

Assets for EA SPORTS UFC 2 can be found here.

To purchase tickets to UFC Fan Expo at the Las Vegas Convention Center and watch the finals, please visit UFCTICKETS.

Jason's been knee deep in videogames since he was but a lad. Cutting his teeth on the pixely glory that was the Atari 2600, he's been hack'n'slashing and shoot'em'uping ever since. Mainly an FPS and action guy, Jason enjoys the occasional well crafted title from every genre.
@jason_tas
Previous Get acquainted with the cast of Preacher
Next TOPPS issues digital card right from Mets game