It’s too early to point at a game and shout, “Game of the year!”, but let’s face it, come the end of the year, XCOM 2 is going to be on my list… and probably somewhere close to the top.

The story in this sequel to XCOM: Enemy Unknown is a direct continuation of the events which followed the (spoiler warning for the first game) canonical defeat of the XCOM project and the fall of man. When this new game opens, most people seem to have forgotten all about the years prior to the alien takeover 20 years before.

I say that because the only people still battling the extraterrestrial enemies are the Resistance, everyone else seems strangely okay with it. The tutorial reminds you of the basics of Turn-Based combat (or teaches you, if this is your first time in the ring), while rescuing an unknown figure in some kind of container. I’m not sure if this counts as a spoiler or not, but the person in the container is none other than you, the commander from the first game.

The goal of XCOM 2 is to bring glory back to the human race and to find out the secret agenda of the alien overlords. We must start from small beginnings, and to win the war we must win several battles… like… a lot of battles. 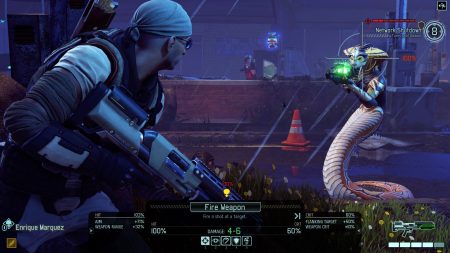 The gameplay is nearly the exact same way it was in the first game, but I’ll explain it anyway in case you’re a newcomer. The game focuses on turn-based isometric strategy (think Warhammer 40k, if you’re into the tabletop gaming scene).

You will take turns squaring up soldiers against alien hordes the majority of the time, but quite frequently you’ll want to pay a visit to the mobile XCOM base known as the Avenger, which ironically bares strong resemblance to the Helicarrier from the Marvel Avengers movie; but more on the ship in a bit, this paragraph is about the combat! Just before shipping out for an on-foot combat mission, you will need to prepare your squad.

You start out with four soldiers in your squad (your quad, if you will), but this size can be upgraded fairly quickly… that is, if you’re skilled enough at keeping your soldiers alive. That’s right, if your soldier dies he/she’s gone, never to return (unless you’re a dirty little cheat and reload a previous save). So there’s an added incentive to try to keep them alive. And speaking of incentives…

Long gone are the days of loitering around in your base all day, waiting on something to happen. In XCOM 2, there is real risk as you can, and probably will, lose the game unless you know what you’re doing. The alien group, which I for some reason forgot to mention already, is known as Advent, and they have some hidden bone to pick with humanity.

Without revealing what it is (because c’mon – spoilers), the aliens have a not-so-secret plot called the Avatar Project. When you lose a battle, forget to protect some certain asset, or generally faff around too much, the Avatar Project will gain progress. When you capture a base, protect the assett, and don’t faff around, you can knock out progress on the project, and put a damper on their plans. 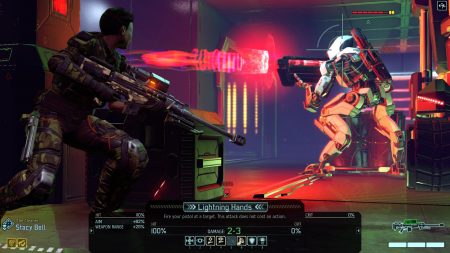 It’s not a true victory though, so keep your celebration time short, or you’ll end up doing what I did; I stopped paying attention to the Avatar Project because I thought I had victory in the bag, with Advent only having one block of progress toward its completion. Well somehow I screwed about too much and now I’m stuck at some kind of standstill, because now they only need to beat me one more time for my playthrough to be over. Basically, this all happened because I spent too much time researching and customizing my soldiers with better equipment, which is a perfect segue back to…

In the Avenger (which is the ship I mentioned earlier, in case you have the attention span of a cat), you can use the research lab, which allows you access to build more accurate weapons and tougher armor. On top of that, you can also perform autopsies on the Advent and Sectoid corpses you collect so you can do more damage and find their weak spots faster.

Another one of the wonders of the Avenger is the Engineering room, where you can actually purchase and build the items you research in the lab. Once you’re finished building, you can take your items to the barracks to customize your soldier’s loadouts for battle. 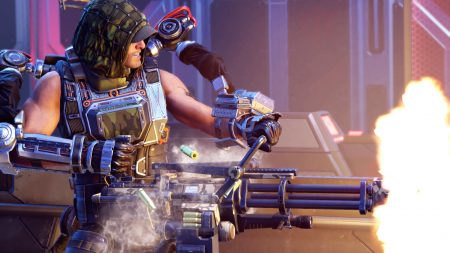 Also in the barracks, you can change your soldier’s voice, as well as color their armor and even add weapon skins. I spent a good couple of hours customizing and tweaking my soldiers to my hearts content (only to have half of them brutally massacred in the following hours).

A bit frustrating, but great

A turn-based title that'll keep you on your toes - 90%

XCOM 2 is a perfect description of what a sequel should be: similar yet bigger, better, and harder, with more content, better graphics, better sound, and upgraded gameplay. I can’t say my time was complete sunshine and roses though, as there is nothing more frustrating in this world than failing a mission because the game decided to let you miss a 98% surefire shot on a hulking alien. Not to mention the menagerie of glitches. I’m willing to overlook these small glitches though because it’s kind of like when you’re eating a delicious chocolate cake, but for some reason you find a small piece of eggshell; it sucks when you actually find it, but you’re not going to throw away the piece, let alone the entire cake because of it.

Five parts actual review, 2 parts sarcasm, 2 parts bad puns, and one part self loathing = one of my game reviews.
Previous Filming on Guardians of the Galaxy Vol.2 is underway
Next Shazam! Mezco brings the big red cheese to One:12 Collection