If you’re an Aliens fan, then you’re going to want to have a peek at what NECA has in store for 2016. The first wave of Cinemachines focuses on the classic horror series of films, and looks pretty phenomenal. 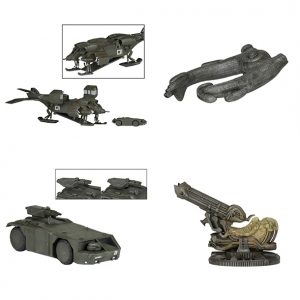 Kind of like Micro-Machines on steroids, NECA’s newest line will kick off with the iconic Drop Ship and APC from the second film, and the derelict Engineer’s ship and ‘Space Jockey’ from the original Alien. Also pretty awesome, is that a mini version of the APC comes with the Drop Ship as well, and it actually loads up into the bely of the orbital drop ship, just like in the movie.

Aside from looking cool, the Cinemachines seem to be really well-made too. Constructed from plastic and die-cast metal, each hand-painted vehicle measures from 5-6″ in size, and will sport what NECA says will be “exceptional detail”. And if you’re already a fan of the company, then you know that was probably something that didn’t even need to be said.

Here’s the official rundown of what’ll be hitting the shelves in April of 2016:

NECA is also asking that the series won’t stop at Aliens, as they promise that Cinemachines will be “celebrating some of the most iconic vehicles from film and television”. Certainly sounds like there’s plenty more to come with this line, so stay tuned.

Check out more shots of the miniatures in action on NECA’s official site here.

Jason's been knee deep in videogames since he was but a lad. Cutting his teeth on the pixely glory that was the Atari 2600, he's been hack'n'slashing and shoot'em'uping ever since. Mainly an FPS and action guy, Jason enjoys the occasional well crafted title from every genre.
@jason_tas
Previous Leeo Smart Alert Nightlight (Hardware) Review
Next Diamond launches Holiday Gift Guide, loaded up with giftable goodies