KontrolFreek’s thumbstick attachments return for another go-around with the Call of Duty franchise. 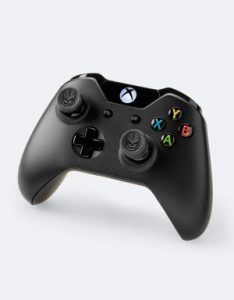 I’m a KontrolFreek convert, there’s little doubt of that. After receiving a pair of the thumbstick enhancers for review on the Xbox 360 a few years back, I went from someone who really didn’t see the point, to someone who never took them off again. Seriously, unless I was playing Madden or something like that, I didn’t click the FPSFreek’s off of my old 360 pad for anything. Actually, now that I think about it they’re probably still on there…

So with that in mind, you can probably see where this review is going to go. Plainly put, the FPSFreeks work exactly as intended and basically give you a brand new feel for your old controller, no matter which platform you prefer. Available for both the Xbox and PlayStation families of consoles, the little devices click into place with ease, stay on without issue during typical play, and deliver a better feeling of control over what you’re doing on screen.

The KontrolFreek line of stick modifiers work by extending the length of the analog sticks that already exist on your controller. So while you won’t be changing pads, you will notice a pretty big difference in the way what you already have works.

Clicking onto the tops of both sticks, the FPSFreeks double the depth of the left stick and almost triple the depth on the right. This gives you a better level of control over your character for maneuvering and a more precise aim when free-looking and targeting in a first-person shooter. KontrolFreek claims that “target acquisition” goes faster as a result and I really can’t find fault with that statement. 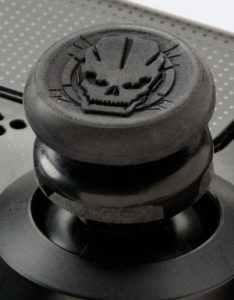 On top of that, they also improve your grip on the controller as they have a concave, rubbery surface that sticks to your thumbs way better than the stock analog sticks do. And they actually work great for not only FPS’, but for any action-oriented game, though they’re meant for the first-person crowd.

Oh, and as an added little perk, these special Call of Duty edition FPSFreeks have the death’s head logo that’s become synonymous with Activision’s mega-franchise etched into them. While that might not do anything from a functional standpoint, it sure does look neat.

While there really isn’t much to pick on here, at first the FPSFreeks do take a little getting used to. You can expect maybe a few minutes worth of a learning curve as you adapt to the new levels of height that the FPSFreek’s add to the sticks on a physical level.

Since I pretty much play everything on my Xbox One and PS4 at this point, I haven’t used my 360 pad in a while, that means that I had to effectively relearn how to aim properly with these, but once I got past that, it was smooth sailing as I played through all of Halo 5 and most of Call of Duty: Black Ops III at this point (review incoming) with them, and have had great results.

I love these things. The enhanced levels of control that they give both aiming and movement over the standard sticks is noticeable. The feel that the FPSFreeks give is one that comes dangerously close to that of buying a new controller. Any FPS fan should give these a look, but really they work well with almost any genre out there, so they’re worth it to check out for all gamers.

No, they won’t completely overhaul the look and feel of your controller, but they come really close, and for a cheap and easy to install ‘mod’ (that gets even better when paired with KontrolFreek’s Grips) these are as close to a can’t miss as you can get.

Jason's been knee deep in videogames since he was but a lad. Cutting his teeth on the pixely glory that was the Atari 2600, he's been hack'n'slashing and shoot'em'uping ever since. Mainly an FPS and action guy, Jason enjoys the occasional well crafted title from every genre.
@jason_tas
Previous Nintendo preps Holiday tour, talks up games of the season
Next Mezco Toyz preps for Black Friday with a special set of deals