Well, the Secret Wars saga is coming to a close, and it’s looking like it’ll be one heck of a bang to end it. 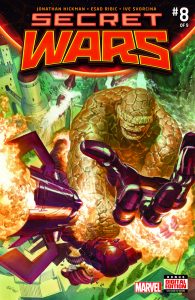 It’s the story that has the world talking. The biggest Marvel event of all time. And it’s rocketing toward it’s cataclysmic conclusion. Today, Marvel is pleased to present Alex Ross’ stunning cover to SECRET WARS #8 – the epic, penultimate issue of the blockbuster event! Chartbusting creators Jonathan Hickman and Esad Ribic march toward the end of their grand saga as the final battle against God Doom rages on! Battleworld teeters on the brink. The Shield has fallen. Armies march on Doomstadt. As Battleworld gives way to a new Marvel Universe…no one will come out the other side unscathed, if they come out at all. Who lives? Who dies? Find out when the penultimate chapter comes to comic shops in SECRET WARS #8!

While I don’t really know what to make of that cover art really, it is kind of awesome taken by itself. I’m also pleased to see Secret Wars coming to an end. I know it was popular with fans and new readers, but I like the Marvel U as it stands, and even though it was an enjoyable read overall (overall), I don’t think there are too many out there who are unhappy to say goodbye.

It certainly seems as though it’s going to go out with a flourish, bringing in an all-new, all-different Marvel Universe too. …which is to say that it’s not really all that different to be honest. For good or ill, it kind of looks pretty much the same as it was before SW started, just with some mixed-up team rosters and a few new, holdover characters from the event (like Old Man Logan). So make of that what you will.

Jason's been knee deep in videogames since he was but a lad. Cutting his teeth on the pixely glory that was the Atari 2600, he's been hack'n'slashing and shoot'em'uping ever since. Mainly an FPS and action guy, Jason enjoys the occasional well crafted title from every genre.
@jason_tas
Previous Xbox One Elite controller is a hit, will be in short supply till the Holidays
Next GOG.com kicks off Fall savings time with the Big Fall Sale