Home / Comics / Take a look inside the Marvel event that is Star Wars: Vader Down

Take a look inside the Marvel event that is Star Wars: Vader Down

Preview time Star Wars fans, as we get an inside look at a few pages of next month’s crossover event, Star Wars: Vader Down. 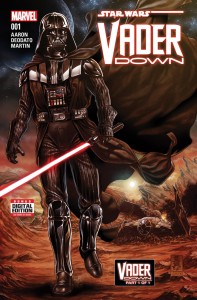 Two of the biggest comics in the world collide this November as STAR WARS and DARTH VADER cross over for the first time! And it all starts right here! Today, Marvel is pleased to present your first look at STAR WARS: VADER DOWN #1 – the kickoff to the blockbuster six-part crossover. Chartbusting writers Jason Aaron (Star Wars, Doctor Strange) and Kieron Gillen (Darth Vader,Young Avengers) join forces with fan-favorite artists Mike Deodato (Original Sin) and Salvador Larroca (Darth Vader) to combine both titles in the mighty Marvel manner!

Vader’s TIE Fighter has been shot down. Seeing this as their one, best chance to take him down once and for all, the Rebellion is ready to throw everything they have at him. Alone, outnumbered and outgunned, Darth Vader must now face the entire might of the Rebel Fleet. But the Rebels are about to learn the true unrestrained power of the Dark Side of the Force.

To defeat their greatest enemy, the Rebel Alliance will risk it all. Yet with it all on the line, could this risky gambit cripple their forces in the fight against the Empire? Find out at this can’t miss crossover event begins on November 18th in the oversizedSTAR WARS: VADER DOWN #1 and continues in the pages of STAR WARS and DARTH VADER!

Cunt me in as pretty excited for this one. Marvel knows crossovers and this is the first (real) one in their relatively new Star Wars expanded universe. It’s actually also something of a pretty rare event in Star Wars comics period, as I can’t remember there being even one while the license was over at Dark Horse. There kind of has to have been I’m sure, but whatever there was definitely wasn’t all that memorable. This one just might be.

Unlike Dark Horse’s Star Wars EU, the Marvel version (which wiped out all of the Dark Horse continuity by the way) stars characters that you already know for the most part. And with all the big stars of the original trilogy on board for the proceedings, Vader Down could be one to remember.

The first issue, whose events will also bleed into Darth Vader #13 (also next month) and Star Wars #13 which hits in December, lands on the stands and digital storefronts on November 18th. Scroll on down for the full preview of what’ll be in the issue.

Jason's been knee deep in videogames since he was but a lad. Cutting his teeth on the pixely glory that was the Atari 2600, he's been hack'n'slashing and shoot'em'uping ever since. Mainly an FPS and action guy, Jason enjoys the occasional well crafted title from every genre.
@jason_tas
Previous Let Leonardo da Vinci teach you about puzzles with Leonardo’s Cat
Next Super Mario Maker Lets You Try Again