High Strangeness is a short indie romp that takes its players through areas inspired by real life places of historical significance, such as Easter Island and the pyramids in Egypt. 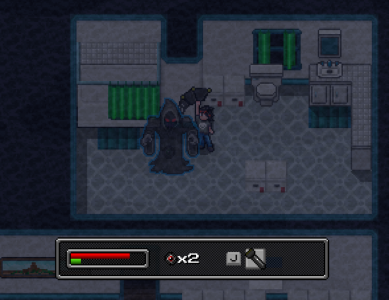 On my first play through of High Strangeness, I clocked just over three hours on the PC version  through Steam. Players take on the identity of Boyd, a young man living in the small town of  Podunk with his cat, Abydos. One night, right before their move, home invaders clad in black  robes come in and prowl the small home. Armed with only a standard flashlight, Boyd takes up  the mission to expel the unwanted guests, and in the next moment is thrust into the adventure of  his lifetime.

High Strangeness prides itself on being a “12-bit adventure.” The truth in the aesthetic of the  game is undeniable. Players spend a majority of the game flipping between a 16-bit aesthetic and  the more retro looking 8-bit look. The switch is quick and easy. One click of a button changes  the game world in a way very similar to the way The Legend of Zelda: Link Between Worlds or  Link to the Past changes worlds for the player.

The “16-bit” graphics look very nice, even if they feel a bit more modern than the traditional 16-bit aesthetics from consoles that many gamers are familiar with. On the other side, however, the 8-bit graphics look ripped from an early Nintendo Entertainment System game. That is a great thing in this case.

Likewise, the music selection for the game works very well. Chiptunes lend the player greatness for ears while their hands combat the evils of the game. One great and yet, simultaneously poorly done bit of music comes from the boss battles. During the boss battles a growling drone music plays. This music was incredibly tense and interesting at first, but as the long fights went on, the droning became mildly irritating. When the fight ended, the droning persisted until the scene changed. 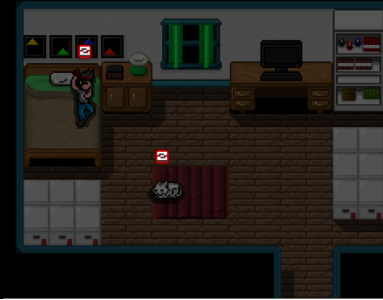 Opening up the game too, the first couple minutes of controlling Boyd were confusing using a keyboard. WASD controls his movement, while UIJK make Boyd perform various actions, such as swinging his flashlight, rifling through his inventory, or sprinting.

Though this did take a little getting used to, after a few minutes of playing, the controls felt very natural. There were a few instances during gameplay where one of my fingers slipped and I pressed the wrong button too, but these instances were few and far between.

The story behind High Strangeness makes a point to stay mysterious for the vast majority of the game, only revealing itself truly when it is ready for the game to take a major turn. The narrative holds the gameplay together and, at times, offers interesting insights.

But above that, it really doesn’t do much else in terms of enthralling the player or keeping them playing. I kept playing for the gameplay; the story was a mild side amusement that got me thinking about life when it was all over.

I have to make a note of the final fight of the game too, so if you want to avoid any spoilers, skip to the next paragraph – the last battle is something that felt to me to be a great idea: an epic monster that the player needs to defeat in order to save his friends. The execution, however, felt more like a jigsaw puzzle with very vague colors instead of an epic battle.

There were a few technical problems I found myself experiencing as I worked my way through the game too. On two separate occasions I found myself glitched and unable to continue. The only solution for this was to close the game to the main menu and reload my save file. Luckily, the game utilizes an auto save feature that saves very regularly. It would have been difficult to actually lose too much progress to the glitch. Nonetheless, being ripped out of the experience is an unfortunate and jarring experience, and ruined the levels that I was playing when the glitches hit.

High Strangeness is a strong game. It knows what it needs to do in order to be a fun, engaging experience. Unfortunately, the game’s length and glitches (two in three hours of playtime) keep me from considering it one of my favorites. The environments and enemies are well varied and the music, save for long boss fights, is a joy to listen to. On the other side, the puzzles get repetitive and are often very simple, with signs helping the player along the way.

Erich was introduced to gaming by his grandfather before he could walk. Since then, he has grown up loving Nintendo and most games in general. He couples his love of videogames with journalism to cover news, provide reviews and tell it how it is in the gaming world.
Previous Mad Max meets Valiant’s Bloodshot in The Analog Man
Next 2D RPG Aurion Legacy of the Kori-Odan announced