Prepare to do some hard time. 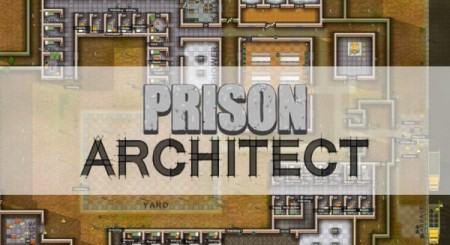 Early Access games are a big thing now, with games being made available in an early state and, hopefully, being updated constantly and added to until it’s officially finished and released.  This system can allow developers to get money upfront which can help development along.  Prison Architect, the fifth game from British developer Introversion, was released as an early access alpha back in September, and has been hugely successful, with constant update and over 1 million copies sold even before it was officially in final release.  Now, the game has left alpha, and we’re ready to see what the finished product looks like.

Prison Architect is a prison management and building simulator.  The idea is to build and upgrade a prison from scratch, take in prisoners and populate your prison with various members of staff to try and keep prisoners as happy as possible.  As well as the cells, there are various facilities such as yards, common rooms, visitation rooms and other things that you can build, or not if you so choose.  You even control how big or small each room is, though they all have their own minimum size that they need to function, and you need to put specific items in them as well, so for example a cell requires a bed and a toilet to be usable, but you can put extra things in the room like desks, a radio or a bookcase if you want.  As the person who builds and runs the facility, you can be as good or as cruel to your prisoners as you want.

The game has a simple graphical style, which is a complete contrast to the wealth of options available when you are building your prison.  The bureaucracy tree opens up a whole new bunch of options for you to research and implement.  From putting your money in a tax haven to reduce your expenses, to allowing re-education and reform for you prisoners, to opening up the ability to deploy your guards to patrol certain areas, the list of options is staggering.  You can designate areas of your prison to only house certain categories of inmate, and you can also create different schedules for each category as well.  So if you want to allow your low risk prisoners to roam around the grounds during the day, but keep the more violent, murderous people confined in their cells all day, only letting them out to eat and shower, you can do that. 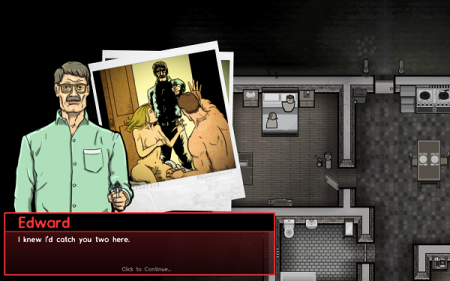 But of course, your prisoners don’t like being locked up, and they have needs which you need to try and meet in order to keep your facility from being torn apart by a riot.  Each prisoner has their own personality and reason for being in prison, and there’s no way to keep everyone happy all the time.  Fights will break out between people, and gangs can form as well.  People’s personalities and pasts can affect how others treat them too.  So, for example, if you have a prisoner who is a snitch, you need to keep an eye out for them, because if their fellow inmates find out about it, things won’t end well for them.

If you want to change the challenge level of the game, there are a bunch of different settings you can change at the start as well.  You can choose how much land you have to build on at the start of the game, you can have existing forests, lakes and remnants of buildings on the land, and you also select from a number of different prison wardens who will modify the way the prisoners act, such as making them more peaceful, or refusing to take any particularly violent prisoners in.  You can even play in full blown sandbox mode, where you have unlimited money and can just do whatever you feel like. 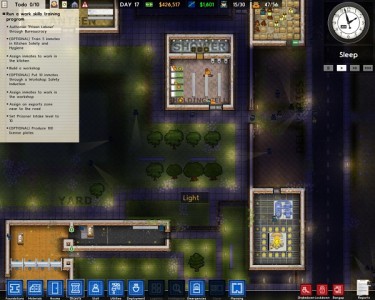 While the sandbox prison mode is the main meat of the game, there are two other modes to play through as well.  There is a fairly short campaign mode, which consists of five levels, each one having a scenario and a story to work through.  This mode does a great job of teaching you how the various systems in the game work.  It would’ve been nice if the campaign was a little bit longer, but what’s there is interesting and gives you a good glimpse into prison life, with it’s various character types and interactions.

The other available mode to play is the ‘Escape Mode’, which turns the game on it’s head by putting you in the role of a prisoner, as you try to escape from prison.  What’s interesting about this mode is that you can choose one of your own prisons to escape from, or you can download one of the many prisons available through the Steam workshop.  Working to the schedule of the prison, you can grab weapons and implements and try to smuggle them around the prison and use them to your advantage.  Performing actions such as fighting other prisoners or staff can gain you reputation points, which you can use to recruit other prisoners to your gang to help you escape.  As with prisoners in standard games, however, there will be consequences and punishments if you get caught doing something you shouldn’t, so you need to be careful.  With so many prisons available for download, there’s plenty of different options available to you. 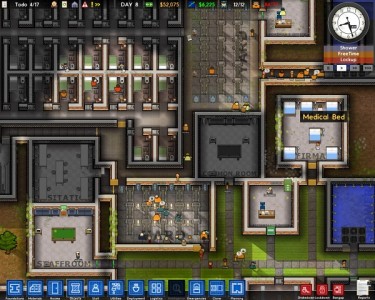 The graphical style of the game is pretty simple.  While playing through the campaign and sandbox games, you will unlock polaroid pictures that depict various scenes, which contain much more detail.  There are hundreds of them to unlock, and you will mostly see them on the floors of rooms as things happen.  The soundtrack that goes with the game is pretty minimal.  The campaign has some doom laden, atmospheric music which fits the scenarios really well, but other than that, all you can hear is the general noise of the prisoners and staff as they go about their business.

The game is a lot of fun to play, as you try and figure out how to structure your prison.  You can revel in sadistic treatment of your prison, as you see armed guards open fire on a bunch of unruly prisoners, or you can despair as your main canteen gets torn to bits and the kitchens set on fire.  And no two games are ever the same.  Each set of prisoners you get in will be unique, and you never know what you are going to get from them until you build your facilities.  It’s an addictive game, and you can quite easily lose several hours as you try to quell one more disturbance, or watch your work men finish building that Psychologist’s office so you can get your hands on that grant payment to build more cells.

FINAL THOUGHTS
Prison Architect is great fun to play, and seems really simple on the surface, but as you go through the game, you can tweak pretty much any aspect of prison life.  It’s easy enough for someone to pick up and play, and the campaign, while a little on the short side, is great at introducing you to the various mechanics of the game, without being too punishing.  It’s taken a while to get officially released, but it’s been worth it.  It’s a superb game that everyone should play, especially if you’re a strategy and management game fan.

Mike is Brutal Gamer's Indie Editor. He has been playing video games since the early 90s and is fond of racing games, puzzlers and MMOs. Typing /played while in WoW makes him cry, but not enough to stop him playing some more.
@Ognawk
Previous most anticipated games of 2015
Next Besiege (PC) Review 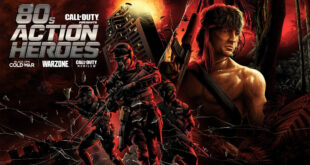 The sandbox just got a little more crowded. The classic Toy Soldiers game is set …