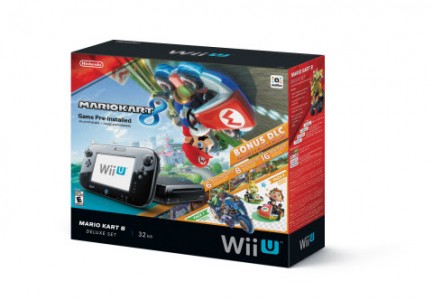 It honestly seems a little odd that this isn’t a Super Mario Maker bundle pack, but then again, that game’s a sure sale for anyone buying into Nintendo’s latest hardware. I mean, people are buying Wii U’s just to play that and only that, so it might seem almost silly to include it as a pack-in.

Instead, what prospective buyers will be getting is Mario Kart 8, which is oddly enough, yet another ‘must buy’ for anyone with a Wii U. Gotta do something though right? The box holds the Wii U, plus a pre-installed copy (yep, digital) of Mario Kart 8, as well as a download voucher for the two doses of DLC for the game.

I’m a little disappointed that there isn’t a physical copy in there, but what are you gonna do. It’s the age that we live in. That aside though, it’s a pretty good deal. And as I mentioned, MK8 is one of the absolute best games on the console, so to get it as a pack-in is pretty great.

Plus, it leaves you free to buy a copy of Super Mario Maker separately. Two Mario games for the price of one really.

Jason's been knee deep in videogames since he was but a lad. Cutting his teeth on the pixely glory that was the Atari 2600, he's been hack'n'slashing and shoot'em'uping ever since. Mainly an FPS and action guy, Jason enjoys the occasional well crafted title from every genre.
@jason_tas
Previous Rock Band 4 adds a bunch more tracks to round out the setlist
Next Share user-created content across platforms with Gunscape