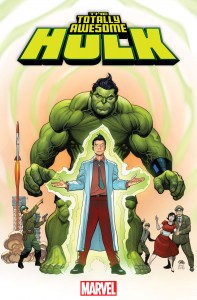 No, I don’t know who that is either, and that’s because he’s a totally new character. So what’s the story? How did this 19 year old kid become a Hulk? Read and (sort of) find out:

Strap in, hold on and Hulk out – it’s time to meet your Totally Awesome Hulk, the one and only Amadeus Cho! That’s right true believer, it’s a all-new Jade Giant for an all-different Marvel Universe and he’s coming to you this December in TOTALLY AWESOME HULK #1! Legendary and storied Hulk scribe Greg Pak (Planet Hulk) returns to the fan-favorite character he created as he powers up to become the newest green goliath! And he’s bringing blockbuster artist Frank Cho (Mighty Avengers, Savage Wolverine) along for the ride!

The mystery behind the new Hulk’s identity has been revealed! But what has happened to the original Hulk, Bruce Banner in the previous eight months? All will be revealed – and the answers will surprise you! But one thing is for certain – Amadeus Cho is a completely different kind of Hulk. Not tormented, not conflicted. Just a giant green wrecking machine who loves being the Hulk! What could possibly go wrong?

“Come December, the one true Hulk will be a 19-year-old Korean-America “Boy Genius” who is going to carry the burden of being the Hulk like it weighs a feather,” says Marvel Editor-in-Chief Axel Alonso. “He’s going to love every minute of it.  In this new series, we are going to lean hard into the fantasy aspects of being the Hulk.  It can’t be all bad, can it?”

Big heart, big action and high stakes await as Amadeus Cho embarks on his first gamma-fueled adventure! Believe us, you’ve never seen a Hulk like this before – and it’s TOTALLY AWESOME. Be there as the Hulk’s exciting journey begins this December in the bombastic debut of TOTALLY AWESOME HULK #1!

I don’t know how to feel about this one. As Marvel continues to completely turn over its universe in the wake of Secret Wars, the Hulk is the latest hero to get a monster-sized shift. While most of the revamps these past few years have somewhat kept the flavor of their classic and iconic counterparts though, Hulk is completely different.

Will it work? I really don’t know. These are some big alterations to the fundamental elements that make Hulk fans like Hulk. We’ll have to see what shakes out. Stay tuned, this one’s going to be different. It does have an awesome creative team though, as The Totally Awesome Hulk #1 arrives from Greg Pak and Frank Cho in December.

Jason's been knee deep in videogames since he was but a lad. Cutting his teeth on the pixely glory that was the Atari 2600, he's been hack'n'slashing and shoot'em'uping ever since. Mainly an FPS and action guy, Jason enjoys the occasional well crafted title from every genre.
@jason_tas
Previous Ten new tracks announced for Guitar Hero Live
Next DST announces second series of Walgreens exclusive Marvel Minimates