Some more hard rock was announced this week for inclusion in Guitar Hero Live. 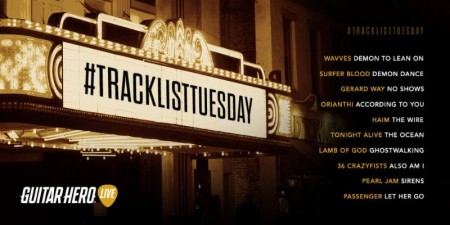 A nice little assortment of tunes hit this week’s Tracklist Tuesday yesterday, including stuff from Lamb of God, Gerard Way, and Pearl Jam. As usual, it’s a pretty wide-ranging assortment too, with a little something for a bunch of different kinds of rock fans.

Here’s what the new additions look like in full:

Guitar Hero Live continues to looks like something to get excited about, with not only it’s new look, but also it’s full set of music that’s included on the disc and the fantastic looking (and seemingly never-ending) GHTV. The game arrives for the Xbox One, PS4, PS3, Xbox 360, and Wii U on October 20th.

Jason's been knee deep in videogames since he was but a lad. Cutting his teeth on the pixely glory that was the Atari 2600, he's been hack'n'slashing and shoot'em'uping ever since. Mainly an FPS and action guy, Jason enjoys the occasional well crafted title from every genre.
@jason_tas
Previous Star Trek’s Captain Kirk holds up your books with this new bookend
Next Totally Awesome Hulk identity revealed, and it’s definitely not Banner