Some gems hit comic shops today, including all the big boys and girls of the superhero set, and the can’t miss continuation of the brilliant Hellboy in Hell. 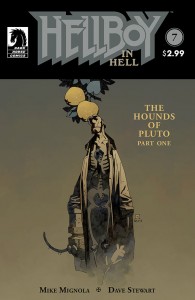 Probably my pick of the week, Hellboy in Hell #7 was a book that I had the god fortune of reviewing a few weeks ago, and it’s pretty fantastic. As someone who wasn’t reading the series for some mysterious reason, I was instantly enthralled by the imaginative setting (spoiler- it’s hell) and frankly fantastic storyline that Hellboy creator Mike Mignola has cooked up.

The only problem with the issue? You’re going to wish Issue #8 was out when you finish it.

Hellboy in Hell might be one awesome ride, but it’s hardly the only winner this week at the racks. DC’s reinvention of Superman continues with issue #43 (while it lasts), and Marvel’s massive Secret Wars series rolls on ever forward with even more crossovers. I kind of can’t believe that series is still going on, but then again, I find myself saying that with a lot of crossover ‘event’ books.

Scroll down for the full list of my selections for the week, and as always you can click right here to head over to Previews magalog’s website and forge one for yourself.

Jason's been knee deep in videogames since he was but a lad. Cutting his teeth on the pixely glory that was the Atari 2600, he's been hack'n'slashing and shoot'em'uping ever since. Mainly an FPS and action guy, Jason enjoys the occasional well crafted title from every genre.
@jason_tas
Previous LEGO Dimensions to offer over a dozen levels of play
Next PAX Prime 2015: Nintendo looks to make an impact