In the Marvel U for half a century, the spy agency celebrates its birthday in issue #9 of the current run with a little story about a man called D.E.A.T.H. 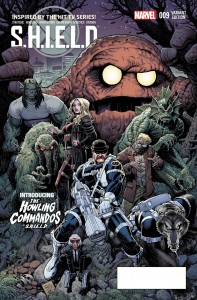 This August, celebrate a half century of Marvel’s premier intelligence agency in one colossal issue! Today, Marvel is pleased to present your new look at S.H.I.E.L.D. #9 – the oversized anniversary special! Be there when blockbuster writer Mark Waid and artist Lee Ferguson answer a question 50 years in the making. A question that lies at the heart of the creation of SHIELD – who is the “Man Called D.E.A.T.H.”?! This full length story features a never-before-published S.H.I.E.L.D. sequence penciled by Jack Kirbyand inked by Jim Steranko!

Then, Al Ewing and Stefano Caselli bring you the terrifying origin of the new Howling Commandos! Before they spin out into their very own series later this year, witness the return of Dum Dum Dugan as he steps from the shadows to assemble a team truly unlike any you’ve seen before!

Rounding out this massive issue, S.H.I.E.L.D. #9 also includes the very first S.H.I.E.L.D. story by Stan Lee and Jack Kirby! Be there as a half-century celebration of espionage and intrigue comes to comic shops this August inS.H.I.E.L.D. #9!

I can’t say I’m much of a SHIELD fan myself, but I love the concept here for the 50th anniversary issue. Not that I have much of an idea as to the Man called D.E.A.T.H. plotline, but the inclusion of the Kirby and Steranko work is gold, as is the reprinting of the first ever story with the group.

And I have to say too, the idea that there’s going to be something of a horror turn for the Howling Commandos is definitely interesting. I’d like to see, at the very least, how that’s set to kick off. A story that’s also included in this issue (just in case you didn’t read the pr text above).

Jason's been knee deep in videogames since he was but a lad. Cutting his teeth on the pixely glory that was the Atari 2600, he's been hack'n'slashing and shoot'em'uping ever since. Mainly an FPS and action guy, Jason enjoys the occasional well crafted title from every genre.
@jason_tas
Previous August Games with Gold offers up Ground Zeroes and more
Next Act of Aggression’s Super Weapons pack a mean punch