Pokemon Shuffle is a free-to-play puzzle game for 3DS systems and is coming soon to Apple and Android devices. While the game is free you also have the option of making in-game purchases through the Nintendo eShop.

Pokemon Shuffle requires players to match-3 or more pokemon to score points and to battle wild pokemon within a set number of moves. Run out of moves and it is game over. As players clear each stage, they have the opportunity to capture the wild pokemon and add it to their roster.

Each pokemon has a catch rate. The higher the rate the easier it is to capture it. Higher leveled pokemon have a lower catch rate, so it is recommended that players clear stages as quickly as possible. The number of moves they have remaining raises the catch rate of the pokemon.

Just like previous Pokemon games in the franchise each pokemon has a strength and a weakness, so players are encouraged to pick pokemon that is best suited for each stage. At the end of every battle your team gain experience points and level up to get stronger. 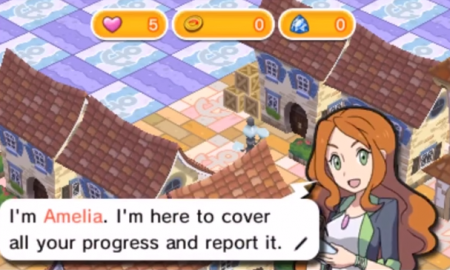 Pokemon also evolve through mega evolution- an evolutionary form that is temporary. In order to do this, players must acquire a mega stone for a specific pokemon which is earned through special trainer stages. Once the stone is acquired players must have the pokemon in their party and make matches of that specific pokemon,until a gauge that is located on the left-hand side fills up.

Once that gauge is filled the pokemon will evolve automatically which will help you get more matches and deal more damage to the opponent. 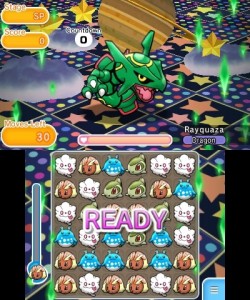 Players also have the option of purchasing power ups and bonuses to help make the stages easier, by using their in-game coins which are earned through every battle or the check in option (requires an internet connection.)

Each check in gets you 500 coins per day.

It is also important to note that players have a set of five hearts to start with. You can consider this as lives, so each stage you choose to play requires one heart. Each heart gets replenished within a set time frame, but you can get more hearts if you desire by using jewels which are earned through special battles, or by purchasing them through the Nintendo eShop.

Pokemon Shuffle has over 100+ stages including special and expert stages that contain rare pokemon, so players can expect hours of non-stop puzzle fun!

The game is colorful, detailed, and pleasing to the eye and while the audio isn’t something that is ground breaking, the music is still nice to listen to as it adds to the flow of the game.

Pokemon Shuffle is an addictive puzzle game that is fun to play, and challenges players. While the free-to-play formula certainly has its pros and cons and I believe that it would have done well as a full game, without wait times or in-game purchases it still is a welcomed addition to the Pokemon franchise.

Hey! I'm Nadia! I am a big fan of RPGs and you can almost always catch me playing one in my spare time. Writing is my passion, and my intention is that you all learn something through my work!
Previous Hear the Call on GOG with these Cthulhu re-releases
Next Adventure game classic Gabriel Knight comes to tablets