Bloodshot Reborn #6 launches into a new arc this September

Ray has a tough road ahead, as he takes out ‘infected’ killers and re-absorbs the Bloodshot nanites. And this September, he’ll be facing his toughest opponent yet. 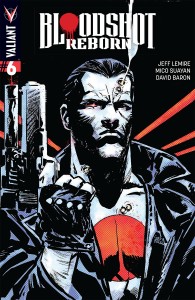 Bloodshot is on the hunt. Determined to stop the violent reign of terror that plagues Colorado, Bloodshot must journey across the Rocky Mountains to destroy the remaining nanites that have caused mass murderers to spring up across the state. But will the drugs, booze, and insane visions rattling around his head put an end to his journey before it begins? And have the tiny machines freed from his bloodstream finally found the one thing Bloodshot fears the most – a new host even deadlier than himself?

That’s kind of vague, but so far Ray has been up against a series of men who’ve been relatively weak (compared to him in his Bloodshot prime) and unable to control the nanites that they’ve got in their blood.  If he’s on the trail of someone who can control them though, at least to some degree, he just might be in for a tough time.

Issue #6 of Bloodshot Reborn is set to be a new jumping on point for the book, a new arc that’s perfect for new readers who might not have been following along with the comic or the characters. Valiant does this quite often, and it’s a really terrific way to get new fans onto the bandwagon, a bandwagon that you should be on if you dig action and sci-fi stuff in your comic books by the way.

Bloodshot Reborn #6 blasts onto the racks on September 19th, from the talented creative squad of Jeff Lemire and Butch Guice. Oh, and check out that ‘ode to Terminator’ variant cover from Garry Brown. Just try and resist tracking that one down. Full preview below.

Jason's been knee deep in videogames since he was but a lad. Cutting his teeth on the pixely glory that was the Atari 2600, he's been hack'n'slashing and shoot'em'uping ever since. Mainly an FPS and action guy, Jason enjoys the occasional well crafted title from every genre.
@jason_tas
Previous Street Fighter V will have plenty of DLC, but you won’t have to buy any of it
Next Tremor shakes things up in Mortal Kombat X