There’s a ton of music on the setlist of Harmonix an Mad Catz’ Rock Band 4, and this week the publisher has announced new and classic tracks from Foo Fighters, Aerosmith, Paramore, The Outfield, and more.

Some great songs right there, and ones that should be pretty fun to jam to in RB4. Aerosmith’s newly announced inclusion comes off their “platinum-selling third album” with Toys in the Attic, while Foo Fighters’ The Feast and the Famine is actually off of their latest release, so there’s quite a bit of new and old here too which is neat to see.

Check out the new announcements:

These are just the latest additions to the game, which already includes songs from big-time artists like Elvis Presley, The Killers, Bruno Mars, The Who and plenty more. And then of course, there’s the legacy catalog of tracks, which can also be accessed, and boasts in excess of 1500 songs to play. Start tuning up that plastic guitar, the band is back in session on October 6th when Rock Band 4 launches on the Xbox One and PS4.

Jason's been knee deep in videogames since he was but a lad. Cutting his teeth on the pixely glory that was the Atari 2600, he's been hack'n'slashing and shoot'em'uping ever since. Mainly an FPS and action guy, Jason enjoys the occasional well crafted title from every genre.
@jason_tas
Previous Rush Hero (iOS Review)
Next Fire BAD! Frankenstein stomps on over to Dynamite Comics for new mini-series 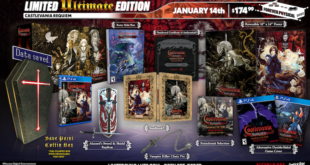 Released digitally on the PS4, Castlevania Requiem is about to put a stake through disc-based …