Fire BAD! Frankenstein stomps on over to Dynamite Comics for new mini-series

Straight from the mind of writer Dean Koontz, Frankenstein: Storm Surge is set to debut as a new six-issue miniseries from Dynamite Comics. 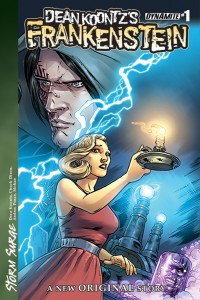 Frankenstein: Storm Surge #1 continues the fan-favorite reimagining of “The Modern Prometheus” seen in Koontz’s previous Dynamite series, focusing on cast members Victor and Erika. While healing from a beating she suffered at the hands of Victor Helios – once Dr. Frankenstein – and her own maker, Erika Five decides to leave the comfort of her glassed-in porch and bottle of cognac to go exploring into Victor’s secret home lab, which she believes is an antechamber to something more sinister. With the help of the bodiless head Karloff and his disembodied hand, Erika finds a secret lab and within sees experiments revealing Victor’s attempts to do more than create a race of super-immortals… and a mirror-like portal to another universe, one of infinite realities Victor is trying to bridge for his own terrifying reasons!
Regarding the new series, Dean Koontz says, “With Frankenstein: Storm Surge, Dynamite has wonderfully revitalized this series. Uber cool!”

Even if you’re not really a fan of novels, chances are that you know Koontz, who it probably isn’t much of a stretch to say is one of the biggest and most well-known writers on the planet. A New York Times bestselling author, Koontz has sold over 450 million copies of his books, which include titles like “One Door Away From Heaven, From the Corner of His Eye, Midnight, Cold Fire, The Bad Place, Hideaway, Dragon Tears, Intensity, Sole Survivor, The Husband, Odd Hours, Relentless, What the Night Knows, and 77 Shadow Street”.

While Frankenstein: Storm Surge comes from Koontz originally though, it’s being adapted by none other than Chuck Dixon, who’s a writer that comic fans should definitely be familiar with. Dixon most famously worked on Batman over at DC Comics, but has tons and tons of books to his name, and writes both Winterworld and Joe Frankenstein at present.

This is a pretty big departure from the norm for Frankenstein fans, with plenty of different characters and original interpretations of existing ones. It should hit all the right notes for horror fans though, and Frank fans in particular with a nice mix of both classic and new ideas. You’ll be able to check out the first issue of Frankenstein: Storm Surge when it hits the racks just in time for Halloween, this coming October.

Jason's been knee deep in videogames since he was but a lad. Cutting his teeth on the pixely glory that was the Atari 2600, he's been hack'n'slashing and shoot'em'uping ever since. Mainly an FPS and action guy, Jason enjoys the occasional well crafted title from every genre.
@jason_tas
Previous Rock Band 4 adds tunes from Foo Fighters, Aerosmith, and more
Next Tempo the Badass Elephant thundering onto consoles and the PC on the 21st