The Voltron Force is back in Dynamite Comics’ new series

Voltron: From the Ashes picks up events some 200 years after Dynamite Comics’ first Voltron series ended, in a six-issue mini-series helmed by Cullen Bunn. 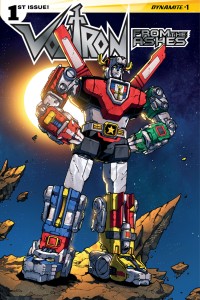 Writer Cullen Bunn says, “You don’t grow up in the day and age of my childhood without developing a deep and abiding love for Voltron, so writing the adventures of such an iconic giant robot is a real thrill and a treat. With this story, I hope to show a couple of different sides of Voltron, one vibrant and exciting like the old cartoons, and one a little more dark and even frightening. This dichotomy should be a lot of fun for readers and allow me to explore different sides of the characters involved. For me, Voltron has this mythic quality that I really want to delve into, and I’m excited to see what fans think of my contribution to the Voltron legend!”

That’s very true I think. Voltron, among a vast menagerie of incredible properties that appears first in the 1980s, is a little special. The epic that played out across that cartoon has attained an almost legendary status among fans and those who appreciated the day’s pop culture icons. It’s also one that’s seen relatively little in the way of a revival, even since so many have.

Dynamite Comics has seen to that of course, with a well-received series that’s now followed by From the Ashes. Since it’s starting off two centuries after the end of Voltron, there will be a totally new team in command of the lions and Voltron himself. And while we know little else about the new series, we can tell you that Transformers artist Alex Milne will be joining Bunn to form the head… I mean the creative team… of Voltron: From the Ashes.

If you know Milne’s work from that other giant robots series, then you know this is going to be a good one to ogle. On the same note, Bunn is a terrific writer and has scripted fan favorite Deadpool and Captain America arcs, so there’s another feather in the old metallic cap of Voltron.

The new series debuted this September, and you’ll be able to read it both physically and digitally through Comixology, Dynamite Digital, iVerse, and Dark Horse Digital.

Jason's been knee deep in videogames since he was but a lad. Cutting his teeth on the pixely glory that was the Atari 2600, he's been hack'n'slashing and shoot'em'uping ever since. Mainly an FPS and action guy, Jason enjoys the occasional well crafted title from every genre.
@jason_tas
Previous SDCC 2015: Nintendo Lounge to showcase Mario Maker
Next Big pinball action goes small with Marvel’s Ant-Man