Zen Studios has its biggest table yet to add onto your copy of Marvel Pinball. Yep, it’s Ant-Man. 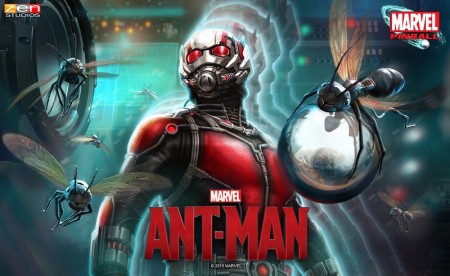 You kind of had to see this one coming. Zen makes tons of great tables for its pinball games featuring all kinds of top properties, and Marvel is one of their best-known. So when a big-budget Marvel flick debuts (and especially when it debuts a new hero for the MCU), you better believe there’ll be a table to go along with it.

The Ant-Man pack includes all the trappings that you’d hope for a Zen crafted table too complete with tons of stuff happening all over it. You can expect themes form the film to run through, as well as battles with Yellowjacket, interactions with Hope Van Dyne, and “side stories featuring Ant-Man and his friends”.

No trailer as of yet, but you can click here to see some shots of the game in action and you can look forward to actually playing it on July 14th, which is just a scant three days before Ant-Man makes its way to the silver screen.

Jason's been knee deep in videogames since he was but a lad. Cutting his teeth on the pixely glory that was the Atari 2600, he's been hack'n'slashing and shoot'em'uping ever since. Mainly an FPS and action guy, Jason enjoys the occasional well crafted title from every genre.
@jason_tas
Previous The Voltron Force is back in Dynamite Comics’ new series
Next Harrow County #3 (Comics) Review