Home / Comics / Like, totally awesome! There’s a new Hulk on the way to the Marvel U

Like, totally awesome! There’s a new Hulk on the way to the Marvel U

No, really, it’s ‘totally awesome’. The Totally Awesome Hulk to be precise, as that’s the new title for the upcoming Hulk book that will bring a brand new jade giant into the Marvel Universe post-Secret Wars. 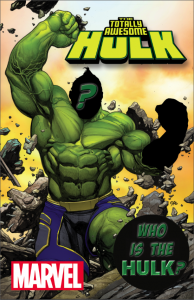 Strap in, hold on, and Hulk out – because you’re in for a rollercoaster ride! This Fall, Marvel proudly brings to you THE TOTALLY AWESOME HULK #1 – a brand-new ongoing series! We promise, True Believer – you’ve never seen a Hulk like this before! Legendary and storied Incredible Hulkscribe Greg Pak (Planet Hulk) returns to the green goliath’s ongoing adventures. And he’s bringing blockbuster artist Frank Cho (Mighty Avengers, Savage Wolverine)along for the ride!

“For decades, Dr. Bruce Banner has buckled under the weight of his fearsome alter ego, the Incredible Hulk,” Says Marvel Editor-in-Chief Axel Alonso.  “Now, someone else is going to take away Banner’s burden, hoist it onto his frail shoulders like it weighs no more than a leaf, and embrace the pure fun being the most powerful being in the Marvel Universe.  It’s the Hulk like you’ve never seen him before: unleashed, unapologetic and totally awesome.”

But who is this mysterious new Jade Giant? And just what has happened to Bruce Banner in the previous eight months? All will be revealed – and the answers will surprise you! Not tormented. Not conflicted. Just a giant green wrecking machine who loves being the Hulk. But will that spell trouble for the entire Marvel Universe?

“We ain’t kidding – this is an all-new Hulk,” says writer Greg Pak in an upcoming interview with Marvel.com. “We’re breaking new ground here – no return to established personalities of the past. But what’s going on is indeed grounded in the history of the character and will delve into the central themes of the Hulk in exhilarating new ways.”

Big heart, big humor, high stakes and bombastic action await! Be there as this new Hulk’s

For more information, check out Marvel.com tomorrow for the full interview with writer Greg Pak.

So, no Bruce Banner (or maybe him in a supporting role) and an all-new Hulk, meaning more than just a new ‘personality’ taking over. Interesting. Personally, I’m a fan of the classic version of Hulk, the rampaging Savage Hulk (though I liked the Prof just fine too, so I’m a little skeptical on this new incarnation.

I’m more than a little biased, mainly because those are the Hulks I grew up with, though Marvel has done some really out there stuff with the character in the last few years. From Planet Hulk to World War Hulk to the introduction of a whole squad of Hulks (Red and such), the ‘Hulk Universe’ has really expanded big time within the Marvel U proper.

Is there room for a totally new version of the character? And will fans (especially long-time fans) take to him? I guess we’ll find out. One thing’s for sure, the book will have a dynamite creative team with Greg Pak scripting and Frank Cho providing the pencils.

The Totally Awesome Hulk #1 smashes the stands this Fall.

Jason's been knee deep in videogames since he was but a lad. Cutting his teeth on the pixely glory that was the Atari 2600, he's been hack'n'slashing and shoot'em'uping ever since. Mainly an FPS and action guy, Jason enjoys the occasional well crafted title from every genre.
@jason_tas
Previous PSN downloads are kind… of… sloooooooow
Next Diamond has a monster list of exclusives lined up for SDCC