Bloodshot returns to form more than ever in the third issue of Bloodshot Reborn, and finds that there’s a bigger menace among the public than he had thought. 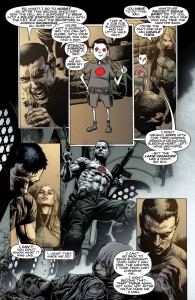 If you’ve been waiting for Ray to get his act together and start acting more like Bloodshot, you’re going to love what writer Jeff Lemire has crafted here in Bloodshot Reborn #3. And mainly that’s because this definitely feels like the start of the payoff that the first two issues set up.

The whole run has been pretty phenomenal so far to be perfectly frank, but issue #3 gives readers some action that’s been sorely missed. Namely, we get to see some glimpses of the white-skinned, red-eyed assassin once more.

I’ll keep the spoilers to a minimum, but things start out exactly as they were for Ray (Bloodshot) before any of this started in Bloodshot Reborn #1. He’s back in a dive motel, trying to forget his past and drown his troubles in substances of various kinds.

After killing Cady last issue, the man infected with the nanites that used to be his, Ray kind of thought that was it. He re-absorbed a few of the little robots, but still not as many as he had when he was full-on Bloodshot, and though he could quietly go back to feeling sorry for himself. He’s still seeing that little cartoon version of himself (Bloodsquirt) and the Geomancer who died in his arms though, and this time around, things are different.

It’s still relatively unclear exactly what these visions represent to Ray, and why he’s having them, but they’re definitely good in that they’re building him back to becoming what he was and who he’s supposed to be. I think anyway. It’s kind of hard to tell.

In any event, a new killer shows his face, and Ray is prompted to find and eliminate him. He’s in a police precinct, which allows Ray to use some abilities that we haven’t seen for a while, and by the time the issue comes to a close, his mission is plain to see, and he’s set to finish it.

While all this is happening, the FBI do a little snooping and uncover some things that put Ray smack on their radar as a prime suspect in the red circle killer case. That’s not all though, as Project Rising Spirit raises back up thanks to a mysterious new player.

If this sounds like a packed issue, it really is. That’s a good thing though for the most part, as the script is dynamite and moves both fast and smoothly. At ties it does feel al little rushed (and I mean a little), but Lemire is writing a heck of a Bloodshot tale here in BR, and it’s only getting better and better. I loved the first two issues, but #3 sets things in motion that I’ve been itching to see since the end of The Valiant.

I have to also once again mention the artwork of Mico Suayan, who’s doing a bang-up job here. Crafting style that’s realistic and yet fantastic when it needs to be, Suayan has a really cool vibe happening here in this book. There’s a good chunk of the story after all that could easily be mistaken for a very realistic story, maybe even one that could fit right in on your favorite police drama or procedural TV show. And this creates an interesting dynamic, because when the more superhuman elements bust loose, it’s all that much more impactful.

And then there’s Bloodsquirt, who’s just kind of… his own thing. However long he’s set to stick around I don’t know, but he’s a pretty fun (and rare lighthearted element) while he is.

Finally, after two issues of teasing, we get something of a payoff in Bloodshot Reborn #3. Not that those issues weren’t great, because they were, but #3 brings more of what fans might want to see from the character, and that’s a very good thing.

Lemire’s script and Suayan’s artwork are both once again excellent, and the tale starts to pick up infinitely more steam here. It’s a loaded issue too, with lots happening and even more in the way of hints as to what’s coming, almost of which hits all the right notes.

Simply put, this is one to get and pour over if you’re a Bloodshot fan. Great stuff.

Jason's been knee deep in videogames since he was but a lad. Cutting his teeth on the pixely glory that was the Atari 2600, he's been hack'n'slashing and shoot'em'uping ever since. Mainly an FPS and action guy, Jason enjoys the occasional well crafted title from every genre.
@jason_tas
Previous If you like awesome stuff, check out Project TriForce’s E3 sale
Next E3 2015 Ubisoft deliver delights and distress all in one show!