Home / Android / Mobiles to get odd with Oddworld: Munch’s Oddysee

Mobiles to get odd with Oddworld: Munch’s Oddysee

The Oddworld Inhabitants have yet another classic Oddworld title on the way to the mobile handsets of the world with Oddworld: Munch’s Oddysee. 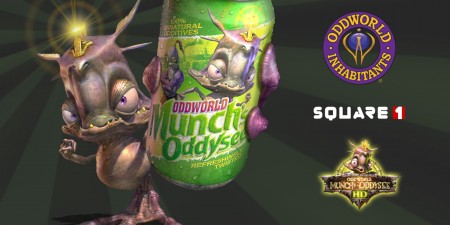 Developed by Canada’s Square One Games, Oddworld: Munch’s Oddysee will follow int he footsteps of Oddworld: Stranger’s Wrath HD, which was also brought to life by the developer. The title, just in case you’ve never played, follows a Gabbit named Munch, the last of his kind. Teaming with series star Abe, Munch employs a bunch of power-ups and special abilities to evade capture and bring some down home justice to the evil Vykkers Corporation. You know, those guys who like to cook up Abe’s people?

Munch’s Oddysee will be upgraded over the original for mobiles, and will also serve as the base for an eventual new PC version, which will replace the edition that’s currently available on that platform. Not to worry though if you already own the PC version, as the upgrade will be a free download for anyone who does. No need to re-buy.

As to when you can expect Munch to take a bite out of iOS and Android platforms, there’s no release date as of yet. As usual though, we’ll let you know as soon as we do.

Jason's been knee deep in videogames since he was but a lad. Cutting his teeth on the pixely glory that was the Atari 2600, he's been hack'n'slashing and shoot'em'uping ever since. Mainly an FPS and action guy, Jason enjoys the occasional well crafted title from every genre.
@jason_tas
Previous X-O Manowar: Valiant 25Th Anniversary Special #1 (Comics) Reveiw
Next Smash Bros Nintendo Direct incoming for June 14th