Hot on the heels of Sub Zero’s announcement last week, Mortal Kombat X’s own hell spawn gets a 12″ scale figure, as Mezco announces Scorpion will be on the way this Fall. 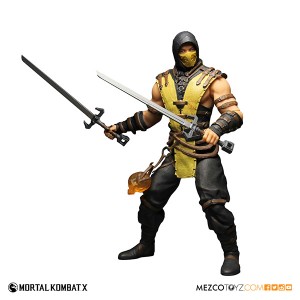 We actually already knew that Scorpion was coming to the new 12″ jumbo figure line from Mezco Toyz, but it’s nice all the same to see the undead warrior in the flesh… uh, plastic. As with Sub Zero, who was announced last week, Scorpion will come complete with a number of accessories and sport that same awesome level of detailing as his eternal nemesis.

He’ll also have a dozen points of articulation, so you can pose him however you like, battling your 12″ Subby to the death on your bookshelf. And like Sub Zero, you can expect to see Scorpion hitting retail, along with other figures in the line, this coming November- just in time for a bloody, bloody holiday.

Jason's been knee deep in videogames since he was but a lad. Cutting his teeth on the pixely glory that was the Atari 2600, he's been hack'n'slashing and shoot'em'uping ever since. Mainly an FPS and action guy, Jason enjoys the occasional well crafted title from every genre.
@jason_tas
Previous Xboxers, here are your free Games with Gold for June ’15
Next Nintendo NX to use an Android operating system? Update: Nope