Four new Game of Thrones figures are heading to retail this Fall, to compliment the four seeing release any day now. 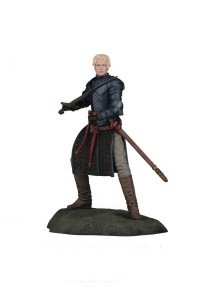 Remembrances of characters dead and gone, are what most of the figures announced kind of are, as GoT has a penchant for killing off… pretty much everyone in both the books and the TV show. And while the latter is quickly forging its own narrative, separate from the novels that birthed it, it’s still plenty popular in its own right, and one of those shows that fans make a point of never missing.

And with that in mind, Dark Horse has a fresh series of four of their ultra-detailed figures that are headed to shelves any day now, including:

And past them, there’s another set of four on the way for this Autumn, when GoT withdrawal will be at its height as the new season won’t start up till the following year. Those figures will include some of the most popular characters from the show, including:

Each figure is detailed to the hilt, and as accurate as can be, to his or her character on the HBO TV show. While you won’t find any articulation here, you will find some of the best-;looking representations of the GoT cast you’ll ever get to display on your desktop or library shelf. Each figure runs $24.99-$39.99 USD a piece.

Jason's been knee deep in videogames since he was but a lad. Cutting his teeth on the pixely glory that was the Atari 2600, he's been hack'n'slashing and shoot'em'uping ever since. Mainly an FPS and action guy, Jason enjoys the occasional well crafted title from every genre.
@jason_tas
Previous Here’s even more of the tunes that you’ll be jamming to in Guitar Hero Live
Next Mezco debuts awesome One:12 Dark Knight diorama/2pk for SDCC