It’s Track List Tuesday music fans, and that means the name’s of a bunch more songs for Guitar Hero Live have just been released. 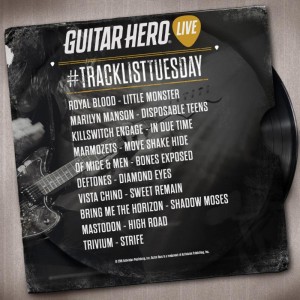 In keeping with the weekly tradition (which actually just started last week) Activision has unveiled a few more of the songs that’ll be on the track list for their Guitar Hero revamp, Guitar Hero Live. As you might imagine, there’s rock to be had here, and lots of it. GHL will actually sport a few different variations on the theme when it hist retail this Fall for Xbox and PlayStation consoles, as well as the Wii U, but this latest installment of reveals falls squarely on the heavier side of tunage… with a few exceptions of course, sprinkled in for good measure.

Here’s what was listed:

Had rock for the most part, and definitely a track set that plays to the name ‘Guitar Hero’. Expect another dose of songs next week, same GH time, same GH channel.

Jason's been knee deep in videogames since he was but a lad. Cutting his teeth on the pixely glory that was the Atari 2600, he's been hack'n'slashing and shoot'em'uping ever since. Mainly an FPS and action guy, Jason enjoys the occasional well crafted title from every genre.
@jason_tas
Previous Brutal goes to EGL
Next Dark Horse brings new Game of Thrones figures for Autumn