There’s more Ghost Riders in this new book than you’ve ever seen in the Marvel U before. And am I seeing things, or is that a centaur with a mini-gun attached? 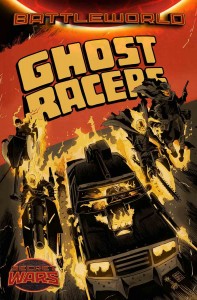 Start your engines! Prepare for terror! The deadliest racers on Battleworld are peeling out and unleashing their fury this June. Today, Marvel is pleased to present your new look at GHOST RACERS #1 – a new Secret Wars series from writer Felipe Smith and artist Juan Gedeon! Put the pedal to the metal as the Spirits of Vengeance go head to head in lethal, cutthroat races! Welcome to the scorching hot track of Battleworld’s arena – for the one and only spectacle known as the Ghost Races! Enslaved and bound to the arena, cursed souls race at the speed of sin – and anything and everything goes! Friendship, loyalties and family bonds will be tested. All in the name of the top prize – temporary freedom from the arena! But what happens to the unlucky and unholy losers? Now, Robbie Reyes, Johnny Blaze, Danny Ketch, Alejandra Blaze and many, many more step onto the track for all-out, high-speed warfare. The stakes have never been higher as the most vicious Spirits of Vengeance do battle for their very souls! Who will come out on top and who will be left in the dust? Buckle up for the most wild ride of the Secret Wars when GHOST RACERS #1 speeds into comic shops this June!

That is a centaur right? Was the old west Ghosty a centaur? …I didn’t think so…

Centaur or no though, it continues to be pretty darn awesome to see all these old characters in Secret Wars, not to mention all the new ones. Danny Ketch was always my favorite Rider, so it’s particularly neat to see him in action again, even though it’s at the behest and under the command of… well, we’ll just call him the lord of Battleworld. Don’t want to give anything away after all, just in case you haven’t read the second issue of Secret Wars yet.

If you have, then you know that the last remaining vestige of the Marvel Multiverse is a very, very (very) strange place. And it’s only going to get stranger in Ghost Racers #1 when it hits on stores on June 10th.

Jason's been knee deep in videogames since he was but a lad. Cutting his teeth on the pixely glory that was the Atari 2600, he's been hack'n'slashing and shoot'em'uping ever since. Mainly an FPS and action guy, Jason enjoys the occasional well crafted title from every genre.
@jason_tas
Previous Heroes of the Storm (PC) Preview
Next Update #9 arrives for Ace Combat Infinity