Heroes of the Storm (PC) Preview

Heroes of the Storm (HotS) is Blizzard’s foray into the MOBA scene, and their answer to the heavy hitters like League of Legends and Dota2. I want to explain why HotS is so great by first referring you to this article by Kotaku as to why League of Legends is so toxic. They touch on a lot of points, some fair and some not, but the gist is indicative of the genre and gaming communities in general. Toxicity exists, it’s prevalent but not too common, but it’s something no one enjoys (except the trolls). 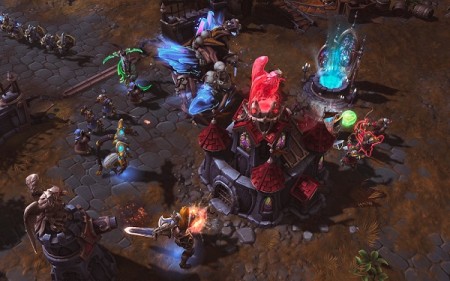 HotS does away with almost every bad thing referenced in that article with how it’s been designed.

Oftentimes, multiplayer games will make or break the fun factor with how players treat one another. While a little teasing and trash talking is the way of the world (and it can help or hinder the social narrative, depending on your opinion), it’s prevalence isn’t questioned, but rather the methods used. We’ve all heard or experienced the horror stories of Call of Duty voice chat, with pre-teens mouthing off to internet strangers in ways that often make habitual cursers (like your truly) blush, or give small animals PTSD.

Heroes of the Storm does away with just about every form of inter-team communication. There’s no global or all-chat to call your opponents scumbags, or make insinuation about their mothers and the neighbour. There’s no voice chat, so we’re all spared the ear-piercing screeches of kids who lied to their parents about what an M rating is. All we have is team chat, where you can (if you so choose), berate your teammates for picking the wrong champion, kill-stealing and feeding, or even not helping the team.

Which brings me to my second point:

2. HoTS has been designed to eliminate competition within a team, and foster cooperation instead.

Most MOBA games (Smite, LoL, Dota2, etc) award individual players for the actions they make. You killed a minion? You get the experience and gold. Friend leaps in at the last moment and kill the guy you were fighting? Sorry bud, you get crap, and Friend gets the fame, glory, shoe endorsements and that sweet Ferrari you made an appointment to make a down payment on.

HoTS does away with individual rewards. Experience and levels are team-based, and I know that sounds really stupid and confusing, but let the sheer weight of that design decision sink in. Every time one of your teammates makes a kill, you ALL benefit. Are 4 of you having a team fight, and 1 person is pushing? You ALL get the experience for the push AND the teamfight. Killstealing doesn’t exist, since everyone on the team gets the experience for the kill. But what about all of that sweet gold you would have gotten?

3. Heroes of The Storm has simplified the systems but kept the strategic complexity

It’s become second nature to look up guides for particular builds in MOBA games; when to pick and level up skills, what items to buy and when and in what order, etc. For the more casual player, it’s frustrating to have to relearn how to play the game when all you want to do is jump in and start playing. For the more hardcore players, it’s an exercise in tedium to keep track of your gold and items and when to get certain items. It takes time from the fun of the game (the fights and pushing etc) and forces you to abide by a mechanic that purposefully takes you OUT of the game experience.

HoTS did away with the entire currency system, opting instead for a variety of skill changes and choices at different levels. At the core of the system, players are still given options to customize their character to their playstyle and the role they prefer; instead of having to return to their home base and waste time figuring out what to purchase, they can make the decision on the fly, even in the middle of a fight. Despite what critics say, there are functionally very few of the options that are not useful; the value of each choice changes depending on playstyle and chosen role. There are higher damage-dealing builds, and some that bring a lot more utility or survivability at the cost of some of that damage. There are very few not-as-good choices, and never any game-losing bad ones. 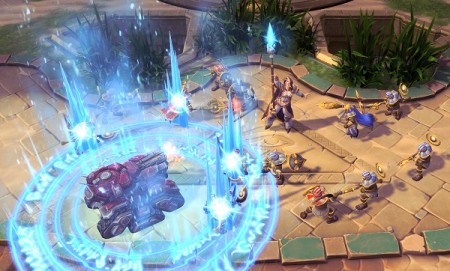 Whereas in games like League of Legends (where certain roles are demanded, like ADC and support) there exists a social template for what makes a ‘correct’ team, HoTS does away with that. The roles used refer more towards the playstyle of the character; functional roles like a tank for absorbing damage, or a support for helping others out are viable on most characters. LiLi, a support character in HoTS, can function (through selection of her abilities and talents) as a damage dealer or a straight healer; either is viable and both have their places in different team compositions. There is no wrong way to build a character, and the variety of talents and abilities allows for a varied style of play with each hero.

The upfront cost of individual heroes and skins in Heroes of The Storm may raise some eyebrows, but what a lot of people seem to casually dismiss is the sheer amount of gold you’re given JUST FOR PLAYING. Between daily quests and account and hero level-up rewards, there’s enough gold to buy the heroes you enjoy, and more than enough to get the requisite 10 heroes to enter into ranked. I’ve done it; I didn’t spend a cent on heroes and managed to get the ones I enjoyed playing as and got the minimum 10, all just for playing the game. On top of that, the Master skins and the full variety of traits and talents become available just for playing with each hero. Your mileage may vary, but the biggest and best rewards are given to players who spend their time playing, not paying.

I could go on and on, but the point I’m making is this: while Heroes of the Storm is far from the perfect MOBA (matchmaking needs a LOT of work, among a handful of other things), it does so much right that it’s hard to ignore it. And to the critics saying it’s not competitive, I’d ask them to show me any other game that had a televised, continental championship WHILE THE GAME WAS STILL IN BETA.

Heroes releases at the beginning of June.

From the frigid wasteland of Canada, Dan has been writing since the early years, when a blank piece of parchment meant a whole world was waiting for him to discover it at the tip of his quill. Then he grew up and realized he could never be like Harry Potter, so he turned to video games instead. He's now a fledgling Game Designer, working hard to make his mark on the industry. In his off-hours, he likes to scorn people who like long walks on the beach. Too much sand.
Previous COSPLAY WITH KINDNESS: AN INTERVIEW WITH KAYLEIGH GRUBB
Next Ghost Riders come to Secret Wars with new Ghosty-loaded mini-series