Ninjak #3 wages war on the Weaponeer

Valiant’s Ninjak just keeps on getting better and better as issue #3 ups the ante with ninjas, ninjas, and more ninjas. 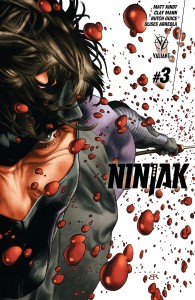 Valiant is proud to present an advance preview of NINJAK #3 – the next 40-page chapter of the explosive ongoing series from New York Times best-selling writer Matt Kindt (THE VALIANT, DIVINITY) and superstar artists Clay Mann (X-Men) and Butch Guice (Captain America)! On May 20th, the most jaw-dropping series of the stands unleashes its next brutal wave of ninja-on-ninja action as Ninjak’s war on the Weaponeer arms cartel erupts into open conflict…and MI-6’s most elite intelligence agent gets ready to betray everything he’s ever known!

Ninjak went to Tokyo to destroy Weaponeer from the inside out…by claiming a seat on their secret crime council of shinobi masters, the Shadow Seven, for himself! Now, as he continues his quest to conquer the world’s most dangerous weapons dealer one member at time, Ninjak is going to require each precise tool in his arsenal…and every deadly skill he’s ever learned. Colin King is about to enter the fight he’s been training for his entire life.

Plus: after the full-length tale by Matt Kindt and Clay Mann, discover more of Colin King’s never-before-told origin and training in NINJAK: THE LOST FILES from Kindt and Butch Guice – the essential second feature of smash-hit new series that has fans and critics stunned

Outside of the fact that there really are no ‘ninja’ comics out there except Ninjak, this book is special for a few reasons. For starters, it’s just incredibly well done with stupendous art (in both the main and backup tales) and a so far great script from Matt Kindt. And let’s be honest, that’s not too likely to change any time soon.

Then there’s the fact that Ninjak somehow makes both the main arc and that backup important, fun, and impactful. Neither one is a throwaway and both have come off really great in issues 1 and 2. And… Ninjak is just a flat-out badass too.

There’s a feel to the action that’s a bit different in this book than in Valiant’s other titles. It’s got a wit that you don’t find coming out of a Bloodshot or X-O Manowar ( as good as those books both are). And it’s just tons of fun for it. Basically, if you’ve yet to read this one, give Ninjak a try with issue #3.

Or better yet, grab the first two issues if you can find them. It’s a terrific read and yet another feather in Valiant Comics’ cap. Ninjak #3 arrives on the ranks from Kindt, Butch Guice, and Clay Mann on May 20th.

Jason's been knee deep in videogames since he was but a lad. Cutting his teeth on the pixely glory that was the Atari 2600, he's been hack'n'slashing and shoot'em'uping ever since. Mainly an FPS and action guy, Jason enjoys the occasional well crafted title from every genre.
@jason_tas
Previous The Last of Us: Left Behind Will Be Available as a Standalone Download
Next Meet Warhammer: End Times – Vermintide’s 2nd playable hero