Andre “The Giant” Roussimoff’s persona and size towered over most. Despite being known worldwide and easily recognizable, few fans know the man behind the legend. Andre the Giant: Closer to Heaven, written by Brandon Easton and illustrated by Denis Medri, gracefully presents Andre’s rise in popularity parallel to his personal saga. 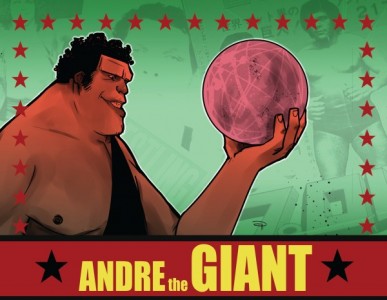 The voice sounds authentically Andre’s without hints of cliche or caricature. A giant of a man looking to fit into the world found his place in the ring. Andre’s story is closely tied to wrestling; however, fame is not his main motivation in the sport. Easton wrote his story with care as well as humor and insight. Andre the Giant: Closer to Heaven is a surprisingly touching narrative that reveals a new side to Andre “The Giant” Roussimoff.

The graphic novel chronicles Andre’s simple beginning in Molien, France on a simple farm. He grew large early and fast, making him valuable on the family farm. Eventually he felt he outgrew the farm and felt he need to leave to find where he fit in. Feeling too big for the world became a recurring theme in his life.

His size only brought scrutiny and criticism, except when he entered the ring. In wrestling, he was king. His size was an asset and people were staring in awe instead of horror or derision. Andre’s story is impossible to tell without also discussing the rise of wrestling; however, Closer to Heaven quickly establishes that Andre was more than a character in the ring or on the screen.

Closer to Heaven uses wrestling’s timeline to mirror Andre’s life rather than being the focal point. Wrestling is where Andre always felt at home, where he returned because it was familiar and was the source of his few fleeting moments of happiness, but it also brought Andre a lot of his pain.

Easton expertly narrates the evolution of wrestling and Andre’s role in it, both as a star and a regular man. Andre’s problems with vices and physical deterioration from wrestling as well as his disease are presented both impartially and empathetically by Easton. There were a few times the story quickly shifted time and place, causing a sense of discontinuity; however, it was not a persistent issue. The graphic novel reads like a memoir, filled with poignant regret and happiness. Clearly a fan, Easton treated the subject with deliberate respect.

Mediar illustrated a stark and beautiful story. The placement of fewer, large panels on each page created a greater sense of size. The layout highlighted the proportion of Andre to the rest of the world. The art direction, a blunt cartoon-realism, works with the muted color palette amazingly. It echoes the frank and simple tone of the narrative.

The simplicity of the style does not interfere with the emotional connection to the story. The stark lines, blunted shapes, and muted colors heighten the succinct dialogue and set an atmosphere that balanced between pessimism and optimism. Medri illustrated the perfect accompaniment to Easton’s story.

Andre the Giant: Closer to Heaven presents an honest reflection on a man known mainly for his size. Easton delicately reveals the highs and lows of Andre’s life from the nostalgic perspective of the giant himself. With a voice and tone perfectly matched to Andre’s demeanor, Easton’s writing brings Andre back to life. The illustrations keep pace with the writing, bolstering the narrative and atmosphere.

An easy read that will capture the attention of many, Andre the Giant: Closer to Heaven presents a unique opportunity to revisit the story of a legend.