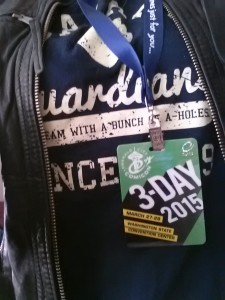 Emerald City Comic Con stormed Seattle this past weekend and rained geeky awesome all over downtown. Though plagued by last minute celebrity cancellations, there were many amazing and gracious guests. Not simply focused on comics, fans of sci-fi, anime, and fantasy congregated to celebrate. Emerald City Comic Con was a great weekend for vendors, guests, artists, and attendees.

Celebrity guests this year listed some major star power. Stan “The Man” Lee himself appeared! They actually had to turn people away from his signings, but is anyone surprise? Unfortunately there were several cancellations. Dante Basco, Jenna Coleman, Levar Burton, and Morena Baccarin were unable to attend; however, the ECCC staff did a great job finding excellent replacements. Troy Baker, Alex Kingston, Marina Sirtis, and Jewel Staite were fantastic and I am glad they could attend. My favorite celebrity guest was Patrick Warburton. His panel was hilarious and charming. He graciously and honestly answered questions and charmingly interacted with attendees. According to other attendees, all the guests were fantastic.

This was the year of kickstarted comics! Many self-created and published artists were proudly displaying their works. A fantastic opportunity to talk to the artists to learn about a new story or series. Matt Harding’s Pop Apocalypse is a perfect example. Harding described the world as a post apocalyptic world run by pop culture icons and he had my money. (Expect a review soon!) Meeting the artists and creators of Cyanide & Happiness was a highlight of the weekend. Drawing whatever crude, offensive, and creative idea guests had, Rob DenBleyker, Dave McElfatrick, and Kris Wilson constantly joked and entertained anyone near their booth. 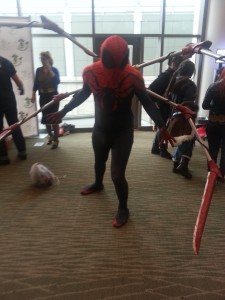 Luckily, ECCC once again escaped the Hollywood machine that has taken over San Diego Comic Con. Besides Stan Lee’s presence, neither Marvel nor DC had a strong showing, which was a welcomed surprise. This allowed guests to full explore the smaller and newer artists and titles. The largest publisher booths were actually Image and Dark Horse, a nice bump for independent publishers. Although at this point, it’s hard to place either one of those companies in the indie category, but both companies interacted with attendees with enthusiasm and mutual fandom.

The number and variety of panels blew my mind! From fencing demonstrations to how to get into nerdy shape, the topics were endless. Normally a panel junkie, I only attended one this year on women in the gaming industry. Led by Tifa Robles with Becky Taylor and Yakaru Dezaki as guests, these women discussed their experience in games and gave advice to those interested in pursuing careers in the industry. The diversity of panels mirrors the growing diversity among fans.

Emerald City Comic Con strove to include many different types of fans and the range of guests showed how successful the staff was. The growing inclusion of new perspectives and voices will only help evolve the taste and direction of comics, tv shows, and other platforms. Part of this change came from the great strides made within comics and other nerd culture, such as the introduction of Miles Morales and the new 52 Batgirl. Hopefully creators, writers, and artists took note so we can continue this trend! 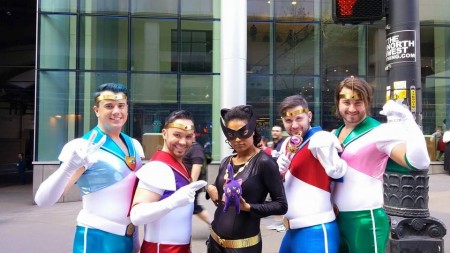 Emerald City Comic Con featured many new artists and comics as well as featuring many areas of nerd culture. Attendees celebrated shared interests and mutually geeked over celebrities. The event ran smoothly and all those in attendance had a great time. Next year will only be better and I can’t wait. I saw, I bought, I spent too much.

Favorite Game: Shadow of the Colossus. Favorite Moment in gaming: 100% completing Legend of Zelda: Majora's Mask. Life isn't hard, Megaman is.
Previous MomoCon brings gaming giants to Atlanta this May
Next Dying Light to get some crazy superpowers for April Fools Day