Turn based strategy with robots.  And a ball.

In the far flung future, rather than being our powerful overlords, robots will in fact face off against each other in a violent ball game for our entertainment.  At least that’s what will happen if the future in Frozen Cortex comes to pass.  The latest game from British developers Mode7 Games might look like a future sports game on first glance, but it has much more in common with it’s spritual predecessor, Frozen Synapse, than any ball game.

Frozen Cortex is a turn based strategy game set in a future sports setting that is probably best described as Blood Bowl meets Frozen Synapse.  You control a team of 5 robots, against another team of 5, and the aim is to grab the ball and get it to the Endzone.  Each turn, both you and your opponent will map out movements for each member of the team.  Once both players have planned their turns, the action will play out by way of a video.  When certain events happen, such as the ball carrier being tackled or a long pass being thrown, the action will pause, allowing both teams to adjust their actions according to what has happened.

But it isn’t just the opposing team you have to watch out for, but also the arena itself.  There are a variety of blocks all over the field, some high and some low.  You can pass the ball over a small wall to another player, but you can’t pass the ball over a high wall, so you have to plan for the location of walls as well.  There are two main rules sets in the game, the standard rules and ‘duplicate’ rules.  The main aim is to score more points than your opponents.  The main way of doing this in both rules sets is getting the ball in your opponent’s endzone, but you can also get points by running over highlighted spots on the field while holding the ball.  In duplicate mode, there is also a ‘mid end zone’ which awards extra bonus points.  In the regular mode, a phase of the game ends when someone gets the ball into the endzone.  In ‘Duplicate’ mode, the phase ends when the offence team either scores in the endzone or loses the ball to the other team. 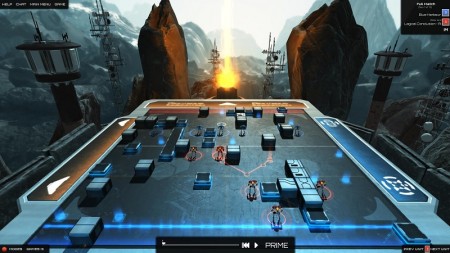 The game comes with two single player modes.  The main mode is the Knockout mode.  Here, the aim is to win as many games as possible without losing, at which point the game ends.  As you gain momentum, you get rewards to help you upgrade your team and give you a chance of advancing.  The knowledge that the game is over once you lose adds an extra layer of tension to the game as you try and plot your tactics.

The second main mode in the game is the Global Cortex League, which sees you pitting your team of robots against a number of others over a league season.  The aim is to get as many wins as possible.  You get awarded money depending on the result, and in between games, you will get the opportunity to visit the Robot Market to buy new robots to replace the ones currently in your team, all with different statistics and names, each having a humourous bio that reflects upon their skill, or lack thereof.  If you’re the gambling type, you can also bet on the matches that happen each week in the league.  There’s also the ability to set up custom leagues and games with your own rule sets, which is nice if you’re the creative type.

The multiplayer mode plays like the single player mode.  You can choose whether or not to open yourself up to challenges, where the game will constantly search for opponents in the background while you’re doing other things.  There’s a ranking system as well as leaderboards, so you can check your progress against other players.  In what seems to be a rarity in online games these days, the community in the game is very friendly and polite and people will be cordial after games.  If you have even the slightlest aptitude for this game, the well balanced robots mean you will always be at least somewhat competitive and never feel overwhelmed. 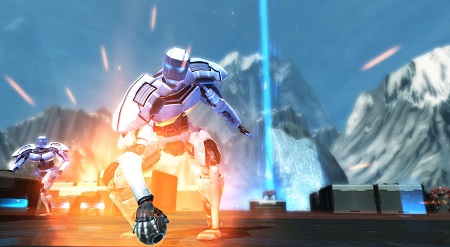 Frozen Cortex had a much more colourful, eye catching look than Frozen Cortex, and the robot players and arenas look really good.  When the camera zooms out from the field, you really get a sense of the game being played on top of a huge skyscraper in a big futuristic city.  The banter between the various commentators is humourous, and the various opposing team coaches all have very distinct personalities, which adds to the enjoyment of the game.  The electronic soundtrack really provides a great backdrop and fits in perfectly.

FINAL THOUGHTS
Frozen Cortex is an excellent strategy game with a great look and a quirky sense of humour.  Plotting out your moves is simple, but winning will require you to predict and outthink your opponent.  It’s tricky at first, but once you get used to how the tactics work, you’ll be hooked.  The multiplayer is great fun, and the customisation options are great for those of you who like to create things.  If you liked Frozen Synapse and Blood Bowl, you’ll love this.  If you felt Frozen Synapse was too tricky, then give this game a shot.  You’ll be glad you did.

Mike is Brutal Gamer's Indie Editor. He has been playing video games since the early 90s and is fond of racing games, puzzlers and MMOs. Typing /played while in WoW makes him cry, but not enough to stop him playing some more.
@Ognawk
Previous Hellboy Right Hand of Doom beer arrives to celebrate Red’s 21st
Next Lukas Korba Releases ‘Qubies’

Following up on its impressive showing at the Xbox and Bethesda not-E3 showcase, the latest …