Marvel’s movies are about to get a dose of your friendly neighborhood Spider-Man thanks to a deal that’ll see Marvel and Sony working together on Spidey’s appearances. 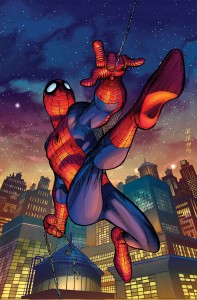 This has been a long time coming, and for Spider-Man fans, it’s a very happy day indeed. Yes, Peter Parker is at long last joining the Marvel Cinematic Universe alongside the likes of Captain America, The Hulk, and Iron Man.

Hitting news outlets last night, the story is basically this: Marvel and Sony Pictures (the movie license-holder for Spidey) struck a deal where Marvel Entertainment would consult on future Spider-Man movies by way of movie universe controller Kevin Feige, who’ll be working with Sony’s Amy Pascal as co-producer. In turn, the character would appear in MCU-designated movies down the line, as a part of that universe. Interestingly enough, it’s also very possible for MCU characters (like the Avengers and Daredevil) to show up here and there in Spider-Man movies.

As of right now, there’s no word on which of the upcoming Marvel Cinematic Universe films will see the first appearance of Spider-Man, but it is worth a notation here that he played a big role in the Civil War storyline in the comic books. And Civil War is the subtitle of Captain America 3, which hits theaters next Spring and is also set to feature that particular arc’s antagonist, Tony Stark.

A few technical elements that you should know about while you chew on that bit; Sony will still maintain control of the character in the end, so if Marvel recommends something for Spidey and they heavily disagree, it’s probably not going to happen. It’s also heavily rumored that this is the end of the line for actor Andrew Garfield’s involvement in the franchise, though it looks like work on the already in progress Sinister Six movie won’t be impeded by this deal. That’s kind of an interesting nugget all by itself there as it sort of confirms that the “Amazing” reboot of the character will still be the one that we’ll see on screen, just with a different actor in the webs.

Stay tuned for tons more on this one in the months and years to come as Spider-Man and the rest of the Marvel Cinematic Universe finally get together… well, almost all the rest. There’s still that matter of the X-Men and the Fantastic Four.

Update: So, a bit to add to this as it looks like there’ll be a much younger actor than Garfield (who’s 31 years old) in the costume next time around according to trade magazine The Hollywood Reporter. This lends to the thought that it won’t be the history already set by the latest Spidey reboot. that seems kind of odd since the Sinister Six is still heading into development, but it could mean that a younger ‘new’ Spider-Man has still been around for a while. That’s a good thing as far as I’m concerned, as another origin story isn’t something that needs to have any time spent on. Source: SuperHeroHype

Jason's been knee deep in videogames since he was but a lad. Cutting his teeth on the pixely glory that was the Atari 2600, he's been hack'n'slashing and shoot'em'uping ever since. Mainly an FPS and action guy, Jason enjoys the occasional well crafted title from every genre.
@jason_tas
Previous First Dying Light DLC drop arrives today
Next Comic Shop Picks: Fire & Stone wraps up and Darth Vader arrives within own book