Marvel’s ongoing series starring one of the greatest villains of all time arrives with Darth Vader #1. And while one sci-fi comic book saga is just getting started, Dark Horse’s massive Alien/Predator/Prometheus crossover comes to a definitive close. 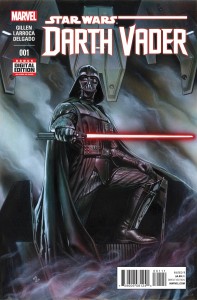 This is a solid week for sci-fi fans, just as much as it is for superhero followers as both title books are more than worth checking out tomorrow. Darth Vader might be one of, if not the, most iconic villains of all time. The character has captured audience’s attention since the first moment he appeared on the big screen in Star Wars way back in 1977, and it doesn’t look like hi popularity is going to let up anytime soon. Naturally then, it only makes sense that Marvel Comics would make him a major part of their new Star Wars Universe, which has already kicked off with the headline Star Wars series, and will continue with a Princess Leia limited run soon.

This series, much like the other books in the Star Wars line, picks up right after the close of Episode IV and destruction of the first Death Star. Darth Vader will chronicle the war for galactic freedom from the other side, as we see Vader and the Empire try and hold onto power in a shifting climate.

As for the other big science fiction release of the week, Prometheus: Fire and Stone Omega is a one-shot that ties up the recent limited series’ that Dark Horse Comics had published. The series, if you missed it, launched a new ‘universe of terror’ for the company and brought together Aliens, Predator, and Prometheus into one cohesive narrative. If you read all 12 issues so far, then this one’s a must buy. If you didn’t and are a fan of any of the above, then I highly recommend grabbing all of them before you read this one, as there are a number of twists and turns before this book opens up that you probably don’t want spoiled.

In more sci-fi comics this week, IDW’s Star Trek ongoing series kicks off that ‘5 year mission’ that the original series made famous with a tale in issue #41 that takes the Abrams-verse crew into uncharted territory and out of the range of Starfleet communications. As much a jumping point as any other, this issue presents a new two-part arc for the reimagined, but familiar, characters.

Those are my major picks of the week, but as usual I have a few more listed below for your perusal, all of which I’ll be reading happily tomorrow evening. If nothing strikes your fancy there, feel free to check out Previews’ complete listing of what’s on the way to stores this week, by clicking here.

Jason's been knee deep in videogames since he was but a lad. Cutting his teeth on the pixely glory that was the Atari 2600, he's been hack'n'slashing and shoot'em'uping ever since. Mainly an FPS and action guy, Jason enjoys the occasional well crafted title from every genre.
@jason_tas
Previous Spider-Man is officially on the way to the Marvel Cinematic Universe UPDATED
Next 3DS Super Smash Bros gets Amiibo support just in time for the new system drop