Ninjak #1 is on the way, and explores the intelligence operative’s past and present, in jumbo format. 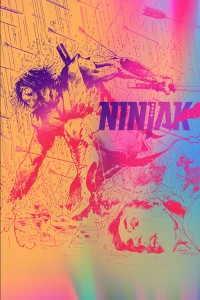 Then: meet inexperienced MI-6 recruit Colin King on his first mission in the field as he learns the basics of spycraft and counterintelligence, and develops a volatile relationship with his first handler. Now: Colin King is Ninjak, the world’s foremost intelligence operative, weapons expert, and master assassin. And he’s hunting the Shadow Seven – a secret cabal of shinobi masters with mysterious ties to his training and tragic past.

Clocking in at 40 pages, Ninjak is going to be a series that offers a lot for fans of the character, and just plain old cool stories. Each issue will feature a pair of narratives, one exploring the origin of the character (which has never appeared in print before) and a second that follows him in the present day as he tracks the terror network Webnet.

Writer Matt Kindt and artist Clay Mann will headline the book and tell the stories set int he modern day, while Kindt and penciler Butch Guice will follow that up with the extended origin story. It sounds like a great way to get in a ton of content, which fans have been clamoring for since Ninjak first re-appeared in the pages of X-O Manowar, and should be a good deal too since you’ll effectively be getting two almost full length tales.

Valiant has been cleaning up in the great books department so far in 2015, and it looks like that’s not likely to stop any time soon. Then again though, if you’ve been following the publisher, you probably could have guessed that.

Ninjak #1 arrives on the racks on March 11th.

Jason's been knee deep in videogames since he was but a lad. Cutting his teeth on the pixely glory that was the Atari 2600, he's been hack'n'slashing and shoot'em'uping ever since. Mainly an FPS and action guy, Jason enjoys the occasional well crafted title from every genre.
@jason_tas
Previous Punch-Out!! arrives on the Nintendo Download
Next Alien: Isolation sells a million copies