Home / Comics / Ivar, Timewalker debuts this week in the Valiant U

Ivar, Timewalker debuts this week in the Valiant U

The third Anni-Padda brother is set to debut in his own title this week as Ivar, Timewalker #1 hits on Wednesday. 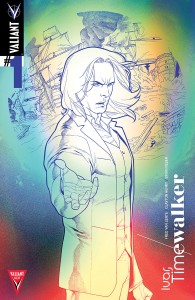 Prehistoric empires! Dystopian futures! And everywhere in between! The past, present, and future of our universe are about to meet an untimely end, and only the mysterious Ivar Anni-Padda can prevent all three from collapsing in on themselves. Unstuck in time, and pursued by enemies simultaneously across every moment of his time-lost life, can the man called Timewalker save everything that ever was, is, and will be? Get ready for a clock-stopping odyssey into the distant past and far future as the most unlikely Valiant hero of all leaps into his first history-ripping adventure!

I can’t get enough of that alt-cover. The lighting effects are absolutely gorgeous, no?

Cover aside, this is set to be a big series for Valiant. Not only does Ivar, Timewalker introduce time-travel as a much bigger element than it ever has been before in Valiant’s universe, but it also gives a voice to the third Anni-Padda brother, a character who hasn’t been much of an influence in general… well, not next to his bro’s Armstrong and the Eternal Warrior anyway.

There’s incredible potential here, and picking up on that is something that Valiant has made a habit of since its relaunch. The publisher tends to seize on stuff and make the most of it, without killing the property either as they’re more than content to end books runs at the height of their popularity to make way for something else.  Something like Ivar, Timewalker.

The debut issue of Ivar, Timewalker is set to arrive on the 21st of this month (this Wednesday) from Valiant and the team of Fred Van Lente and Clayton Henry.

Jason's been knee deep in videogames since he was but a lad. Cutting his teeth on the pixely glory that was the Atari 2600, he's been hack'n'slashing and shoot'em'uping ever since. Mainly an FPS and action guy, Jason enjoys the occasional well crafted title from every genre.
@jason_tas
Previous Console numbers for Holiday 2014 are rosy for the big three
Next Comic Shop Picks: Batman gets super-powered