The Amazo Virus wreaks havoc in Justice League #38, resulting in a super-powered Batman, and Spider-Verse rolls on in Marvel’s Spidey titles. 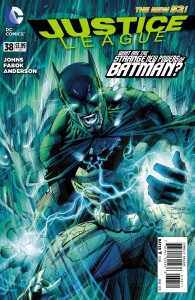 Batman has always been a character without ‘powers’. Sure he’s got strengths that almost all other people lack, including an impressive array of gadgetry, mastery of multiple forms of martial art, and insane deductive reasoning, but he doesn’t have abilities that preclude him from being called ‘human’ really. Well, till now anyway.

Thanks to the Amazo Virus in the pages of Justice League, the Dark Knight now has a set of super-abilities to call his own. Just what they are is still under wraps, but this is a can’t miss issue for bat-fans anyway and a potentially important plot-point for the League in general. Don’t miss it.

Also hitting this week are a bunch more Spider-Verse crossover issues from Marvel. The long-reaching crossover continues in the pages of Amazing Spider-Man #13, Scarlet Spiders #3, Spider-Verse Team-Up #3, and Spider-Woman #3. Needless to say if you’ve been following all along, these are issues that you probably don’t want to skip since we’re getting down to the nitty-gritty now.

IDW also has a few number ones to watch for this week. Both Snake-Eyes: Agent of Cobra and Millennium #1’s arrive on the racks and are ca’t miss books if you’re a fan of either property. Snake-Eyes casts the longtime G.I. Joe as a Cobra Agent after a mysterious absence has him turn up on the villainous side, while Millennium brings back Frank Black and the shadowy Millennium Group in a crossover mini-series that teams him with Agent Mulder from the X-Files.

Jason's been knee deep in videogames since he was but a lad. Cutting his teeth on the pixely glory that was the Atari 2600, he's been hack'n'slashing and shoot'em'uping ever since. Mainly an FPS and action guy, Jason enjoys the occasional well crafted title from every genre.
@jason_tas
Previous Ivar, Timewalker debuts this week in the Valiant U
Next Hyrule Historia is Diamond’s number one best-selling book for 2014