Mezco’s awesome new Dredd is up for pre-order 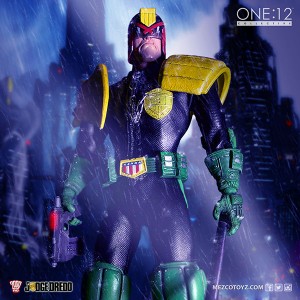 Some of the most exciting figures hitting this year, the One:12 Collective series is super-posable, hyper-detailed awesomeness. Starting off with Batman as he appeared in The Dark Knight Returns comic mini-series, Judge Dredd is set to be the second figure in the line.

Much like the Batman figure before him, the sculpt on Dredd is comic accurate and looks pretty great. He also features a ton and a half of articulation and a costume that’s crafted with an eye towards detail and functionality- working zipper and all. Oh, and accessories? Yeah, he’ll come packing plenty of those.

Points for the ‘choking hand’. If you want to make sure you get one of these bad boys before they hit the streets, you can pre-order here on Mezco’s site right now.

Jason's been knee deep in videogames since he was but a lad. Cutting his teeth on the pixely glory that was the Atari 2600, he's been hack'n'slashing and shoot'em'uping ever since. Mainly an FPS and action guy, Jason enjoys the occasional well crafted title from every genre.
@jason_tas
Previous Parkour zombies run rampant in new Dying Light trailer
Next Capcom releases devilish new round of DMC remake screens