DST has a special four-pack of Pulp Fiction Minimates in Hastings stows and on the shop’s website that should make film fans hungry to pick one up.

Aside from being an exclusive Pulp Fiction collectible, the set is devoted to the classic scene in the movie that pit hitmen Jules and Vince (Samuel L. Jackson and John Travolta) against the would-be diner robbers Pumpkin and Honey Bunny (who were portrayed by Tim Roth and Amanda Plummer in the movie). As you might imagine, since this is a Minimate set we’re talking about here, there are plenty of extras in the box too.

The set includes the four figures (all of which stand in at 2″ tall) and “the mysterious briefcase Jules and Vince are bringing to their boss, two coffee mugs, two pistols, two snub-nosed revolvers, a shouting head for Honey Bunny, four clear display stands and a spare set of empty hands for Jules”. Of course, there are a bunch of other Pulp Fiction Minimates available right now too, so if you want more than just this one set, you’re in luck.

Already on shelves are sets starring “Jules and Vince in their suits, and the Vince and Mia’s Night Out Box Set, with Vince, Mia Wallace, Lance and Jodie. Upcoming box sets include the Bonnie Situation, with Bloody Vince, Bloody Jules, Jimmie and Winston Wolf, and a set featuring Butch, Marsellus Wallace, Zed and the Gimp.” And if you dig Quentin Tarantino’s movies in general, there are also sets based on Kill Bill in the catalog. 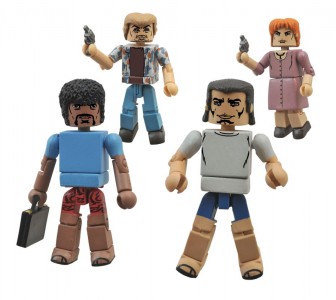 All this good stuff is available right now and you can nab the special exclusive set of Minimates from Hastings online store by clicking right here.

The movies, music and television of the '80s are Jessica's obsession. She's a fan of almost everything from the 'me decade' including (but not limited to) Barbie, Jem, She-Ra, Ms Pac-Man and neon print anything.
Previous Warhammer Quest battling onto the PC and Mac soon
Next The Hobbit: The Battle of the Five Armies (Movie) Review