Home / Movies & TV / The Hobbit: The Battle of the Five Armies (Movie) Review

The Hobbit: The Battle of the Five Armies (Movie) Review

The Final Walk Into Middle Earth… Join Bilbo and his Company as they regain the Lonely Mountain From the dragon Smaug. Doing this Triggers a deadly force, which threatens to destroy Middle Earth. 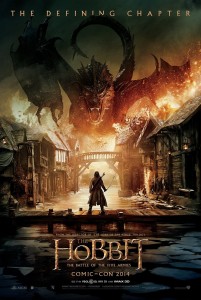 The movie opens following the events of Desolation of Smaug, with Smaug Laying waste to Lake town and its residents. This scene plays out well and you truly get to feel the plight of the lake town residents and the utter devastation Smaug is capable of.  It’s up to Bard (Luke Evans) to finish his father’s work and deliver the final blow to Smaug with the Black Arrow.

We then cut to Thorin who has reclaimed the mountain and ‘dragon sickness’. The movie cuts between Thorin as he fights this illness, Bilbo as he plays negotiator between the elves and the Dwarves, and Gandalf as he faces the Wraiths and Sauron at Dol-Gul Dor. Its here where the film’s first problem begins, I don’t know if it was due to cuts being made for the theatrical version (due to the shorter run time), but some parts of the movie just seemed like they were there to pad the film out, I guess we will have to wait for the Extended edition to see.

In particular the scene with Elrond, Gandalf, Sauroman and Galadriel (where they face off against Sauron and the wraiths) seems like there was a bit missing at the end.  The tacked on Cringe-worthy love scenes between Kili and Tauriel just does nothing for the story either, and feels like it was included to please the romantics out there.

When the titular battle starts, it echoes that of the Pellenor Field from Return of the King. However unlike that battle, you can’t truly invest in the characters here as you never truly get to know them all that well. When Dane Ironfoot shows up over the mountains, and Thorin declares he will have war, you knew he was a dwarf army but you didn’t really know from where. There should have been a scene, which set the stage for just how strong the dwarves bond is, not just a sort of ‘oh hi there cousins’ moment.

The film also falters during the title battle itself as there’s a 45 minute section where it’s just fighting, and there’s no chance to get invested in anything. One minute we’re focused on the dwarves, then we’re focused on the elves, then its back to Thorin in his shelter. I Cant help but feel that if Jackson hadn’t been forced into this chapter it would have been a lot better as just two films. The battle itself was well done though, and you got the feel that the army was huge, especially as they came marching out the wormholes.

Towards the end of the film we are again introduced to Legolas and his ridiculous matrix-esque prowess, namely riding a bat up a mountain and using falling rocks as a staircase. Its ridiculous, but for some reason it was included. The closing 30 minutes again became confusing as we were forced to watch Legolas vs. Bolg, Thorin vs Azog and the eagles arrive to finish the ambushing second orc army. 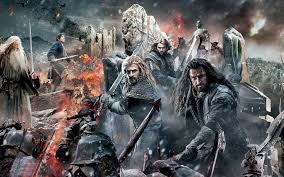 There was nothing wrong with including Legolas to act as a tie over with the lord of the rings series but to reduce Bilbo to a secondary character was a crazy decision given his place in the classic narrative. Due to the fast paced action of the battle, the deaths of the dwarves feel very rushed and you don’t really feel much for them, other than ‘oh okay they’re dead’, and ‘I wonder who will be focused on next’.

The Battle between Azog and Thorin is too Hollywood-esque for my liking, but it will no doubt please some people.  Thorins final speech is good as well, but doesn’t hold a candle to Aragorn’s address at the peak of Minas Tirith. The film’s main problems lie in the fact that some story arcs seem unfinished, though as mentioned above, this is hopefully remedied in the sure to come Extended Edition when the film hits home video.

The ending further ties the links with the Lord of the Rings, With Thranduil telling Legolas to seek out Strider (who happens to be Aragorn) even though Aragorn would be about 10 at this point, but we wont go into that. I will add though that the film’s strongest points come when we are reintroduced to Jacksons Oddness, and as we are treated to a masterful scene where Thorin is in a hallucinatory state as he imagines himself sinking in a lake of gold.

Whilst it’s an enjoyable popcorn movie, The Hobbit: The Battle of the Five Armies is an ultimately disappointing ending to the Middle Earth saga.