Dark Horse Comics’ anthology series is about to smash through the 200 issue plateau, not something that you see everyday in the current marketplace. 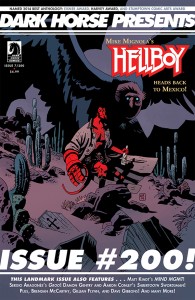 With Marvel and DC starting and ending books on a yearly basis, it sure feels like the 200 issue plus runs of comics are int he past. There are very few high-numbered books left around after all, but Dark Horse is very happy to count DHP among them. The anthology sees collects several stories into one comic ro gee readers a sampling of what Dark Horse has on the docket, month in and month out.

Issue #200 is set to be a doozy too, with a story by Gone Girl scribe Gillian Flynn and Watchmen’s Dave Gibbons, as well as tales by the likes of Mark Evanier, Sergio Aragones, Alex de Campi, Matt Kindt, and Jerry Ordway. The issue will also sport alternate covers by Gabriel Bá and Eric Powell, both Dark Horse mainstays, Powell being very well known for The Goon.

Clocking in at 200 pages, this is no lightweight, and should ring in the anniversary right. Here’s what you can expect to find in its pages:

Jason's been knee deep in videogames since he was but a lad. Cutting his teeth on the pixely glory that was the Atari 2600, he's been hack'n'slashing and shoot'em'uping ever since. Mainly an FPS and action guy, Jason enjoys the occasional well crafted title from every genre.
@jason_tas
Previous Divinity: Original Sin arrives on the Mac App store
Next Worlds are colliding! It’s the Persona Q launch trailer