Question the Creed on the new Assassin’s Creed Rogue website

Rogue casts gamers as a Templar for the first time in the series. It’s a move that, among other things, gives fans a chance to see the world of Assassin’s Creed form the other side of the blade. 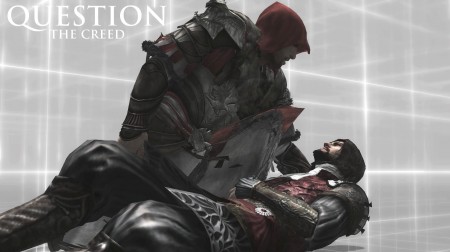 And that’s the very idea behind the all-new website experience designed by Ubisoft. The site takes players back (all the way back) to the beginning and then through the ages that each game represented, as they played with characters like Altair and Ezio, and more. Why go back again?

Because you’ll be seeing the biggest and most impactful assassinations from all those games gone by from the eyes of the Templars. That way you’ll finally see the other side of the action and get to experience both warring sides the AC Universe, in some small way at least.

The real action starts, of course, when Assassin’s Creed Rogue launches (the same day as Assassin’s Creed Unity), which is November 11th in the US and on the 14th in Europe. Click here though, to check out the new website and see how the other half lives (well, for a while anyway).

Jason's been knee deep in videogames since he was but a lad. Cutting his teeth on the pixely glory that was the Atari 2600, he's been hack'n'slashing and shoot'em'uping ever since. Mainly an FPS and action guy, Jason enjoys the occasional well crafted title from every genre.
@jason_tas
Previous Lords of the Fallen enters the Ancient Labyrinth
Next Civilization: Beyond Earth (PC) Review