Texas Chainsaw Massacre is that special kind of horror that doesn’t seem to show up any more. 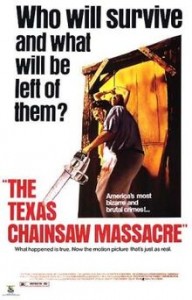 While many modern movies attempt to be terrifying, bloody and disturbing, quite often it doesn’t work and the end result is a badly acted, (more often than not) sex-filled mess that isn’t disturbing or enjoyable to watch. Not only is Texas Chainsaw fun to watch, it’s absolutely heart-wrenching, more than a little disturbing, and pretty uncomfortable to watch (which, in this case, is a good thing).

The plot starts out with the five main characters on their way to visit their grandfather’s grave (and their own… I’m sorry that was lame). Along the way they pick up a hitchhiker near a slaughterhouse where the grandfather used to work. The hitchhiker invites them over to his family’s house for dinner after bringing up multiple questionable (to say the least) topics of main discussion… as well as cutting open his hand and burning a photo after threatening every one in the van. Needless to say, he wasn’t in the van for very long. The group, while worried, continues to the grandfathers house nonetheless.

It doesn’t take all that long after that for the actual killing to begin. And while there is actually very little blood (for a horror movie anyway), the deaths are all pretty gruesome and the music, or lack thereof, doesn’t give any insight to an upcoming murder. That means you have no clue, as a viewer, when something terrible is about to happen and it really does manage to keep you on the edge of your seat, waiting for someone to die.

Texas Chainsaw plays the old game, “Guess Who The Main Character Is” though. The person who seems to be the main character, while not the first one dead, is indeed not the last survivor (though you really don’t expect him to be anyway).

It’s taken me a bit to bring it up, but the acting is phenomenal. The crazy people act genuinely insane, to a point that I backed away from the screen with both of my eyebrows up. The screaming of typical horror movies isn’t too much of a bother either, well, until the last ten minutes or so, but by that time you’ll understand why it’s okay. By “you’ll understand why it’s okay”, I of course mean the infamous dinner scene. The entireity of the dinner scene I found myself swallowing hard, and making faces of disgust by the way. I was actually horrified.

Texas Chainsaw Massacre is without a doubt a classic in all senses of the word.

It’s tense, it’s terrifying, it’s not too long or too short. I will say this however: the utter violence that takes place in the movie, especially the dinner scene, disturbed me greatly; I honestly got sick to my stomach. While it’s perfect in every sense of horror, it’s almost too perfect. I loved it, don’t get me wrong, but I don’t think I would watch it again willingly, especially not by myself.